In Dnipropetrovsk region screenings are accompanied by informational campaign ‘Against hatred’

In Dnipropetrovsk region screenings are accompanied by informational campaign ‘Against hatred’ 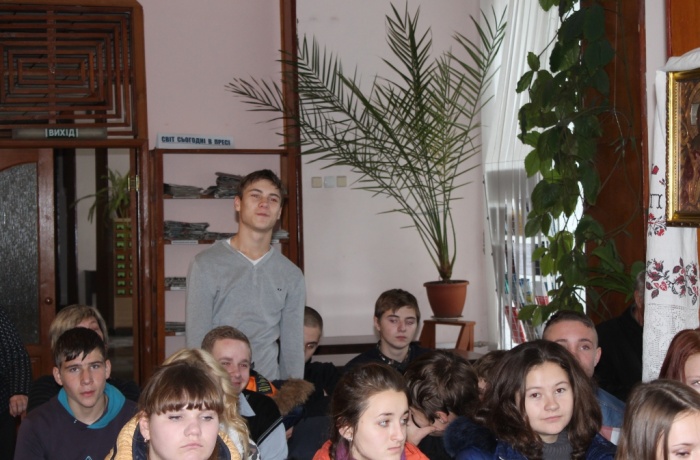 Travelling Docudays UA continues in Dnipropetrovsk region. Screenings will last till December, 17. As at today the festival visited Tomakivka and Dniprodzerzhynsk.

In Tomakivka professional and agricultural college was presented the winner film in special mention category of this year Docudays UA Festival Joanna directed by Aneta Kopacz. College students’ already had a chance to watch festival films in May during Europe Days in Ukraine. However, the impact of art is such that it’s always as the first time. The film by Polish director Aneta Kopacz deeply influenced the audience. This is a story about a cheerful woman Joanna who writes a blog and shares with readers her small and big family joys, at the other hand she has cancer and there are three months left for her to live.

The film is light and sad at a time, maybe that’s why girls’ faces showed both tears and smiles. Every one who watched the film thought their one thoughts: dreams which ought to be realized, relatives and their love, relationship in the family and that every moment of life is precious. Art achieved its goal – discovered in each of us a person with his/her joy and fear, helped escape from the everyday routine for several hours at least and made one think about something really important.

On 11 November there was a meeting in Dniprodzerzhynsk. In the town library named after T.H.Shevchenko the youth was shown the film Sodiq directed by a British director Adeyemi Michael. Sodiq dreamed of going to University and becoming a doctor in 2008. Fast-forward 5 years: he is on trial for murder. Director Adeyemi formed a unique bond with Sodiq and goes in search for what the turning point was, for a young man who once had the ambitions to become a doctor.

Film screening was accompanied by informational campaign ‘Against hatred’. Youth discussed historical examples be means of promotional materials prepared for International Day Against Fascism, Racism and Antisemitism (9 November) and discussed actual problems of the society.

Students of medical training school and secondary school № 44 tried to answer to the question – what is the reason for hatred and discrimination: culture, social problems, historical background? Whereas the answer turned simple – absence of agape.

Next screening in Dniprodzerzhynsk will take place on 19 November at 16.00 in T.H.Shevchenko town library, Syrovtsa str., 16.