Travelling Docudays UA is attracting a capacity crowd in Zhytomyr

Travelling Docudays UA is attracting a capacity crowd in Zhytomyr 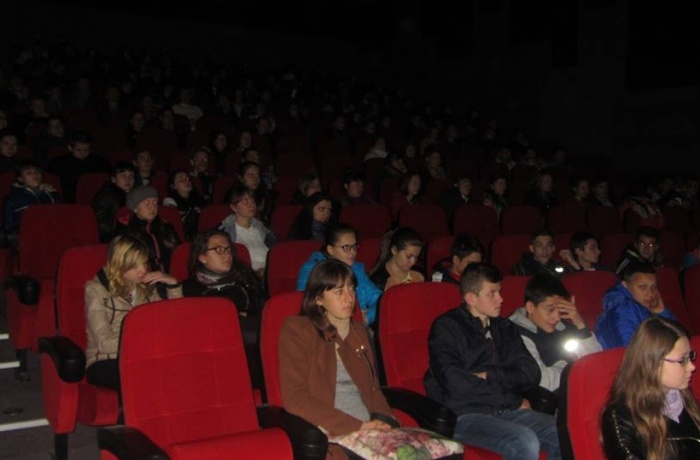 "The cinema hall is full. Viewing of the film Euromaidan. Rough Cut was particularly emotional. During the screening the audience cried, and afterwards everyone sang the anthem," said Zhanna Solovyova, the head of the youth NGO Modern Format. The viewers have already watched Putin's Games, Euromaidan. Rough Cut, Orange Winter, Coal Miner's Day, Sickfuckpeople, The Captain and His Pirate.

The festival will last till October 16. The admission is free.

Three more films from this year's Docudays UA program are ahead:

Since the Swiss government installed a deportation center for rejected asylum seekers in the idyllic mountain village Valzeina, every fourth person in the village is now an illegal immigrant. Life in Paradise – Illegals in the Neighborhood shows the workings of the Swiss asylum policy, how privileged people from the Western world deal with asylum seekers in our neighborhood, how their lives are affected by this, and what it means to live as a rejected asylum seeker in this ‘paradise’.

This is the story of the final months of the 26-year long Sri Lankan civil war. The story is told by the people who lived through it, and through some of the most dramatic and disturbing video evidence ever seen. This footage – direct proof of war crimes, summary execution, torture and sexual violence – was recorded by both the victims and perpetrators, and forms the central narrative of the film. The government believed they would get away with this – but there were witnesses. Their extraordinary testimony and incredible footage is at the heart of this film.

All pedagogic rules are helpless against this unique 9-year-old personality. Good children work hard and pray, they play together. Bad Uliyana doesn’t pray, she is usually alone. Her mother is a drug addict and her grandmother is an alcoholic. So the sisters from the New Holy Martyrs community, where Uliyana is institutionalized, consider her genetically defective. Even Mother Veniyamina, a former professional teacher and now a Christian orphan instructor, can’t cope with her.

Docudays UA festival has already become a traditional event in Zhytomyr. For the sixth year now, the youth NGO Modern Format organizes the festival in the city.