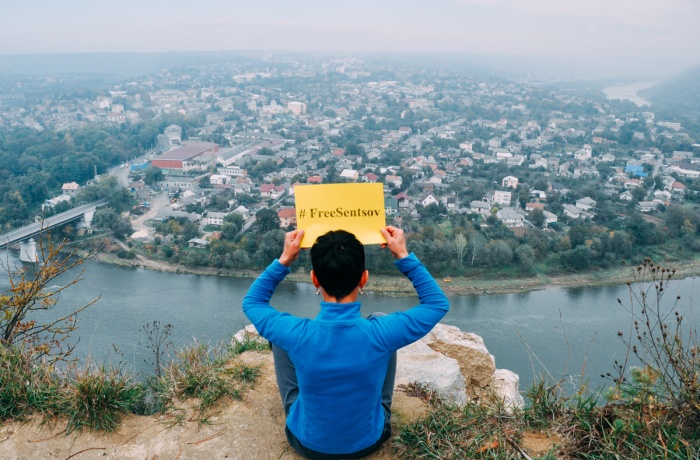 Apparently, the main topic of this year’s Docudays UA was about global climate change for a reason. On the day of the Travelling Festival’s opening, a thermometer in the centre of Zalishchyky would reach 24 degrees Celsius. And it was not because this place, which is protected from the winds from three sides by the walls of Dnister Canyon, is historically considered the warmest in Podillia. Anomalous heat waves are becoming ever more pronounced here in any season. No wonder that in the past three years, the water level in Dnister has fallen to the lowest on record, and many settlements in Podnistrovya have faced acute water shortages...

The Zalishchyky Library has accommodated the Travelling Docudays UA for several years now. As a gesture of gratitude from the festival team for this friendly partnership, the festival organized a presentation of a reprinted edition of Dnipro’s Rapids by the historian Dmytro Yavornytskyi. The book discusses the unique natural, the historical and cultural heritage which was flooded in Soviet times by the waters of reservoirs on Dnipro. The problem of the ecological dangers related to the construction of hydroelectric power stations and man-made “seas” on our rivers is still relevant, especially for Podnistrovya. The government is currently developing projects to construct six new hydroelectric power stations on Dnister. One of them may be built directly near Zalishchyky. There is no doubt that the prospect of making a climate resort in Zalishchyky will be buried forever by this project.

But the program of the Travelling Festival, of course, will not be limited to environmental topics.

This Traveling Festival, for example, was opened by the film The Trial: The State of Russia vs Oleg Sentsov, directed by Askold Kurov. It was nominated for the international Silver Eye award in 2017, which is awarded to the best documentaries of Eastern and Central Europe.

As a part of the Travelling Festival, The Trial was watched and discussed by the free audience in the reading hall of the Zalishchyky Central District Library.

Recently, it became known that Oleg Sentsov was transported to the penitentiary colony in Yamalo-Nenetsky County, in the town with a hardly pronounceable name Labytnangi.

The discussion after The Trial screening revolved around the question of what is needed to increase the international pressure to free Sentsov, and to finally free the Ukrainian film director. The minimum that could be done right there in the library was to have the improvised flash mob #FreeSentsov… And to wish that the photo of this symbolic action, full of sun and warmth of Podillia, reaches Oleg in his imprisonment beyond the Arctic Circle.

The Festival program can be found on its Facebook page: https://www.facebook.com/DocudaysTernopil2015/

The regional partner of Docudays UA festival in Ternopil region is the environmental NGO Green World.