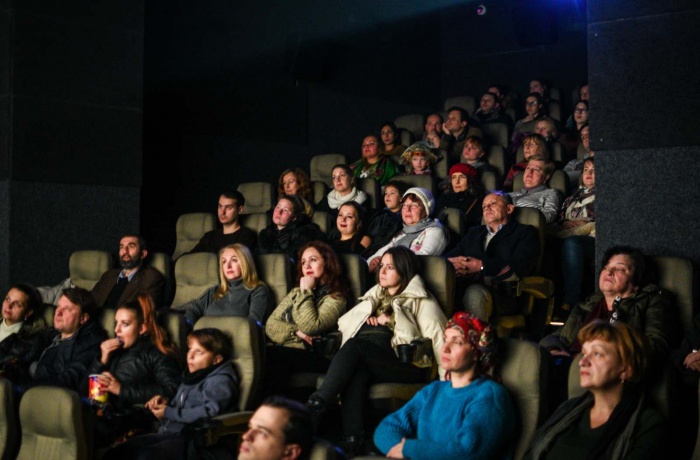 The Travelling International Human Rights Documentary Film Festival Docudays UA has finished its journey. Its human rights films have been watched by residents of 195 Ukrainian cities and towns; the Festival has visited 22 Ukrainian regions.

This year, we thought about the way our everyday life, habits, means of communication are changing with the emergence of digital technology, about the new possibilities for exploring the reality which they open up to us, and about the threats related to control and information security that are hidden in the digital network.

The Festival started on October 1 in the city of Berdiansk with the film Bellingcat: Truth in a Post-Truth world. The screening was followed by a discussion, “Truth in a Post-Truth World: What is not hidden on the Internet?” One of the participants of the discussion was Maria Sulialina, the operator of the database of the Documentation Center of the Ukrainian Helsinki Human Rights Union.

Berdiansk and Boryspil were visited by the exhibition “Suitcases of Human Rights Advocates”. The installation called us to consider the challenges faced by human rights activists in the East of Ukraine and in Crimea. 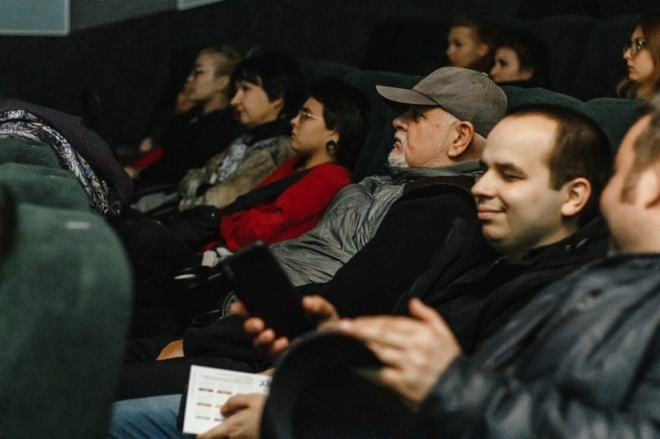 The Festival in Mariupol, Vinnytsia and 16 other Ukrainian cities and towns started with screenings of the film Shut the Fuck Up! The film about a teenager’s fight against corruption became one of the viewing favorites. It was demonstrated over forty times at open screenings. And the screenings were followed by discussions on “Defenseless Human Right Defenders: Why are civic activists attacked and how do we stop it?”

The protagonist Serhiy Chaharov and the filmmaker Taisiia Kutuzova were invited to screenings all over Ukraine. They were not able to attend all of them, but the Travelling Festival’s audiences in Lutsk and Kharkiv had a chance to talk to them.

Equally popular were two other films from the same programme: Facade Colour: Blue and No Status. By the way, the latter opened the Festival in Rivne. In addition to film screenings and discussions, the city hosted 5 lectures for young people on the topics of digital development of the state and safe behavior in the contemporary digital world.

The film The Cacophony of Donbas opened the Travelling Human Rights Film Festival in Volyn. Its producer Yuriy Leuta came to the screening. According to him, the key purpose of the film is to show the influence of propaganda on people and its consequences.

The easternmost screening took place in Mariupol, while the westernmost was in Lutsk. The film was also screened abroad, mostly in France. And thanks to the Travelling Docudays UA, the film was watched in different Ukrainian regions, too. 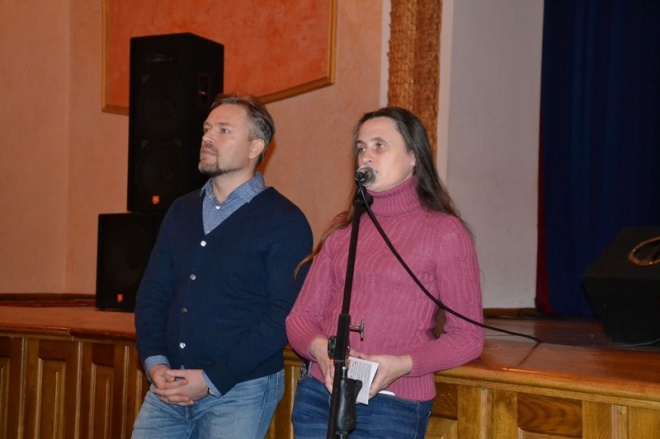 In Ternopil Region, the coordinators of the Travelling Festival Docudays UA presented a special event on the occasion of the 75th anniversary of the liberation of Ukraine from the Nazis. They offered the audience to watch and discuss the film The Way to the Mountains; the discussion was attended by the film’s director Micol Roubini.

In addition to Ternopil Region, the Italian filmmaker also visited Prykarpattya and Odesa Region. The screenings took place in small communities and regional centers, and everywhere they were followed by lively and passionate discussions.

“It is always important to bring back a film to the place where it was conceived, to the people with whom it was filmed. I’m happy to see that this film works as a very powerful tool to discuss things that exist in contemporary Ukraine. I could have never expected that so many people would be thankful for having had a chance to open up. I guess this is what doing documentaries should be all about…

And I am extremely grateful, touched by this incredible experience that really I don't have enough words to say thanks for this opportunity,” shared Micol. 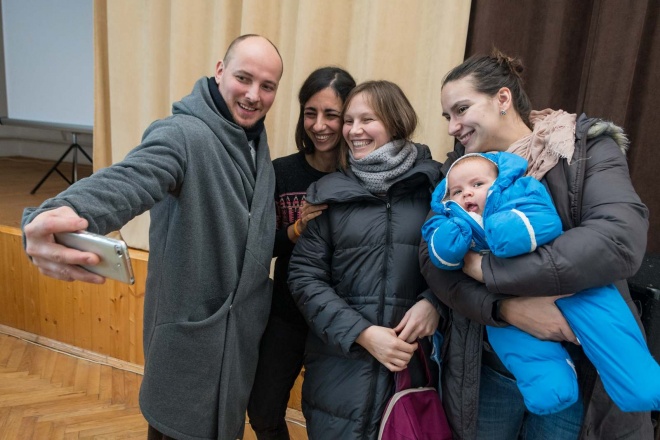 In Kharkiv, the citizens had an already-traditional opportunity to visit the Living Library. In addition, they could see a presentation of the virtual city Pravopil. It’s a 3D model which can be used to see how government bodies are supposed to function in order to meet the standards of human rights protection.

As a part of the festival, in Kherson and Kharkiv Regions, there were rountables and seminars on the topic of “Sheriffs for New Communities.” At the roundtables, the participants discussed organizing security, law enforcement and crime prevention.

On the occasions of screenings of the film Sacawa, workshops on digital security were held in Uzhgorod with the coach Pavlo Belousov, and in Kremenchuk with the key speaker Andriy Mashtak.

During the practical classes, the experts talked about the threats which people face online. The audience members learned how to protect their personal data, how to create safe passwords, and studied the mechanisms used by the government and businesses to collect the personal information of internet users.

In Lviv, there was a seminar on the topic of “World Wide Web Traps: How to protect yourself in the sea of digital opportunities” with the key speaker Viktoria Romanyuk, who told the seminar participants how to distinguish between real news and fake news and how not to allow the media to manipulate our thoughts. 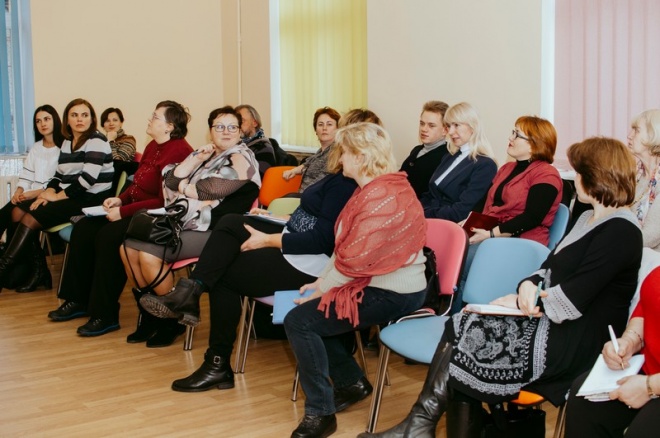 Photo from the seminar "Traps of the World Wide Web: How to Save Yourself in the Sea of ​​Digital Opportunities" in Lviv. Photo: Tatiana Jafarova

An active component of the human rights part of the Travelling Festival was the National Ukrainian Campaign Against Cyberbullying, whose goal is to reduce cases of cyberbullying by informing the society and advocating for changes in public policies in the sphere of human rights. There were open lectures and discussion platforms where the participants spoke about the practices of protecting digital rights.

The Travelling Festival’s film program included the film Bully by Lee Hirsch. At all screenings, the film provoked a lively discussion around the topics of leadership among teenagers, participation of parents and teachers in children’s lives, approaches to conflict resolution.

How to avoid becoming a victim of cyberbullying and learn to oppose it by defending your rights? The participants of the seminar “Training for Discussion Moderators of the Travelling Festival Docudays UA” in Kirovohrad Region learned about this. The event was attended by Iryna Sydorenko, the manager of the Human Rights Department at NGO Docudays; Bohdan Moysa, an analyst for the Human Rights Department at NGO Docudays; and Natalia Filipova, a communications expert. 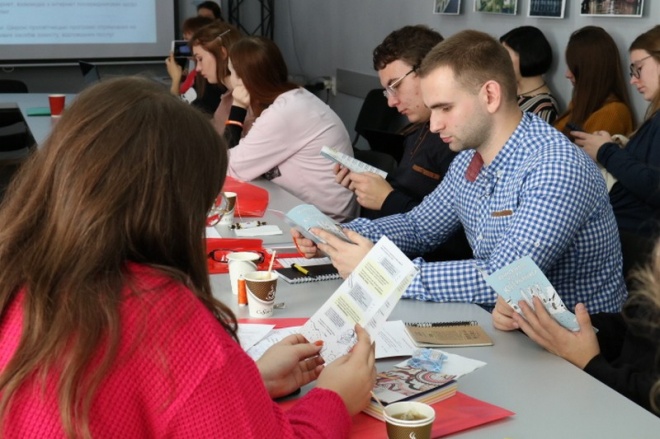 As a part of the Campaign in Lutsk, there was a seminar on the issues of opposing bullying and cyberbullying for school social pedagogues and psychologists. Bohdan Moysa focused the audience’s attention on the types of cyberbullying, its signs, and the mechanisms that can help us use the internet as safely as possible. He also asked to send in successful stories about opposing cyberbullying and proposals on how to improve legislation, because it has many gaps.

To draw attention to the large-scale problem of bullying and prevent it among children and teenagers, there was an exhibition of children’s artworks titled “As We Are: STOP BULLYING” in Uzhgorod. The exhibition will continue to travel around Zakarpattia education institutions for a year. 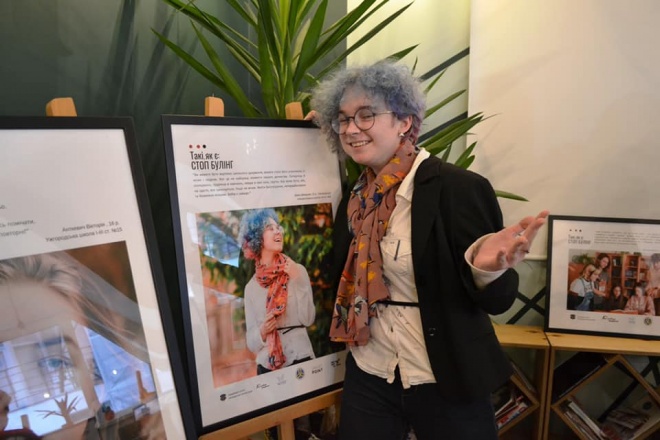 The last screenings of the Travelling Docudays UA took place on December 28. The Festival travelled around the country for three months. The viewers had a chance to enjoy high-quality documentary films about human rights, to discuss socially important topics, to participate in human rights campaigns, seminars, lectures, workshops, etc.

It became possible thanks to the efforts of the whole Docudays UA team, particularly our regional coordinators from 22 Ukrainian regions. We are very grateful to our colleagues and we wish them inspiration in preparing for the next year’s Travelling Festival!

We are looking forward to seeing everyone at the 17th Docudays UA, where we’ll talk about children’s rights and explain why they are important and how we can apply them every day.