As We Are: Stop Bullying!

As We Are: Stop Bullying! 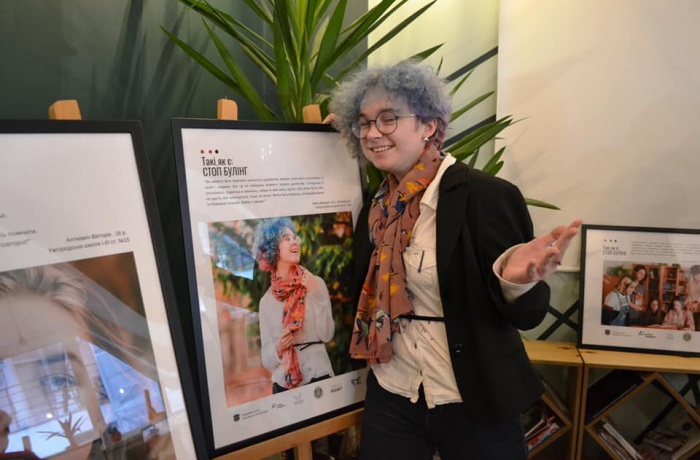 In the contemporary world, we are afraid of being real, we see special characteristics as shortcomings, we abandon our own opinions and preferences to avoid being too different from others. The contemporary world of children and teenagers sometimes sees peculiarities as shortcomings, and this becomes the beginning of bullying. We need to remind ourselves: there are no perfect or ugly people. Everyone is unique!

To draw attention to the large-scale problem of bullying and prevent it among children and teenagers, as a part of the Travelling Human Rights Documentary Film Festival Docudays UA in Zakarpattia, the Travelling Photo Exhibition “As We Are: Stop Bullying” opened at the Smart Point Education Hub.

“People are used to holding their emotions back, so we can often see cases when children start ‘keeping to themselves’ and holding their real emotions back because of bullying. Teenagers usually don’t think that they can cause someone to be depressed by bullying them,” believe Khrystyna Meshko and Aliona Romanchak, students of the Uzhgorod Classic Grammar School.

The exhibition was organized by the Department of Education of the Uzhgorod City Council, the Carpathian Human Rights Agency “Vested,” the Smart Point Hub, and the Law Department of the Uzhgorod National University. The exhibition concluded the eponymous competition whose participants were the city’s school children, also joined by a school from the town of Svit in Slovakia. The artworks were presented in the nominations for the youngest and the medium group.

The event was attended by Natalia Mukhomedyanova, head of the Education Department; Iryna Khokhlova, deputy dean of the Law Department; Maria Mendzhul, deputy director of the Law Clinic at the Uzhgorod National University; Mykhailo Shturak, head of the city’s student government KORZO; Mykhailo Davydenko, director of a department of the local Free Legal Aid Center; Lidia Matsetska, a senior inspector at the National Police Department in Zakarpattia Region. All the participants emphasized the importance and relevance of the issue.

“If you put a rotten apple next to a good one, the ‘bad’ one will affect the healthy one. A similar thing happens with bullying. The victim is gradually weakened, and their condition becomes critical. Meanwhile, more people join the bullying, and the victim gives up. Remember that an apple that was ruined will never again be the same as it used to be,” says Zhanet Smoliak, a 16-year-old student of Doyko Gabor School No. 10 in Uzhgorod, about her painting.

Karyna Vachilia, a student of the Leader Lyceum, noted: “Some people play musical instruments wonderfully, others do gymnastics or dance, still others train in football or karate. There are thin people and more plump ones, tall people and short people… But each of us is unique, not like the others. And this is not a reason to insult or bully one of us! On the contrary, it’s an opportunity to see us as we are!”

The triumphant winners received gift certificates to attend a photography masterclass taught by Yevhen Kudriavtsev, and Uzhgorod cakes. During the exhibition, the participants created unique postcards which could be bought as souvenirs; the people who bought the postcards did a good thing: helped the charity foundation “Everyone Has a Second Chance,” an organization that takes care of homeless animals.

Traditionally, the exhibition is travelling: for a year, it will visit educational institutions around the city and the region, calling on the visitors to avoid violating human rights.