More than half a year has passed since Russia's full-scale invasion of Ukraine. Six months of the war as one endless day of resistance and moral strength of the people who chose freedom. We are the ones who constantly prove to the world that the frenzied aggression of the invaders means nothing against the true unity of the people for the sake of victory. Every day, everyone does everything possible, and sometimes impossible, to defeat the enemy. Six months as one endless day of struggle for independence.

So what helps Ukrainians to stop tanks with their bare hands? To collect millions for Bayraktars? Take down an enemy drone with a can of cucumbers?

What helps us win?

We, the team of the Travelling Docudays UA International Human Rights Documentary Film Festival, are looking for answers to these questions in the stories of the closest people we have known for many years.

The regional coordinators of the Travelling Docudays UA Festival will share their stories about daily life, experiences, difficult decisions, occupation and emigration, losses, big and small victories during the war in our special project. Among them are human rights defenders, public figures, educators, and volunteers from all over Ukraine, who have become indomitable warriors in Ukraine's hour of need — everyone on their own front.

These are 10 stories about escape from hell, saved cultural heritage, film club for displaced people, millions for the Armed Forces, charity dinners in the occupation as a cover for the guerillas, collection of facts about the war crimes of the occupiers, tons of humanitarian aid for refugees from bombed cities, about what makes our new history of victory, makes us different, Ukrainians whom the world admires.

Read weekly on our website and the official page of the Travelling Docudays UA.

Docudays UA International Human Rights Documentary Film Festival is held yearly in 21 regions of Ukraine in partnership with 39 local public organisations. By 2021 inclusive, we have successfully organised and held 18 Travelling Docudays UA festivals in close cooperation with regional partners who helped us to establish a wide range of target audiences throughout Ukraine.

Now our large team is preparing the 19th Travelling Docudays UA International Human Rights Documentary Film Festival during the war. The festival will be held from 12 November to 30 December 30 in 22 regions of Ukraine. The Travelling Festival will also visit foreign countries. Details on Travelling's website and official Facebook page. 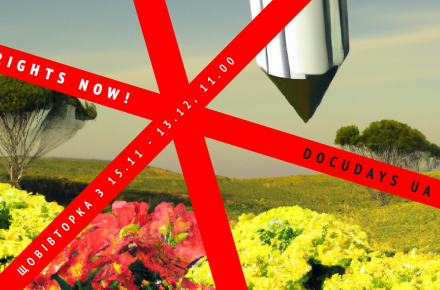