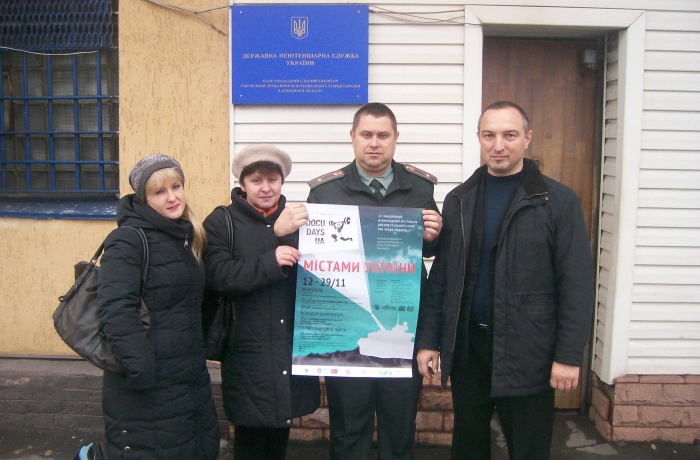 The event was also attended by the Chief of the Department for Pardon Affairs of the Presidential Administration of Ukraine Bukalov Oleksandr, a representative of the Office of the State Penitentiary services in Donetsk Oblast Oleksandr Bendryk and employees of a female penal colony.

The purpose of the festival in colony was an attempt to contribute to open dialogue with the prisoners regarding human rights and their realization. For this express purpose organizers of the event selected a film familiar to the audience. This is a Polish documentary film Starting Point directed by Michał Szcześniak. The film tells the story of a nineteen-year-old Aneta who found herself imprisoned for the murder of her grandmother. After nine years of imprisonment Aneta decides to work as a nurse in a care home for the elderly where she meets Helena, who has been ill ever since infancy. New acquaintance changes Aneta and the latter gives her life a new consideration.

According to Hryhoriy Kurachytskyi, a coordinator of the Travelling in Donetsk region, there was unusual silence in the hall while film screening. The audience was noticed to admiringly follow two main characters of the film. Finally this real story with a happy end provoked a heated discussion. In the end of the event the Chief of the Department for Pardon Affairs of the Presidential Administration of Ukraine Bukalov Oleksandr spoke about future difficulties of adaptation period after the release and also wished all former prisoners to return to full life as quickly as possible.

On 17 November with the assistance of “Priazov Group for Human Rights” the film Starting Point directed by Michał Szcześniak was also screened in Mariupol pretrial detention centre.