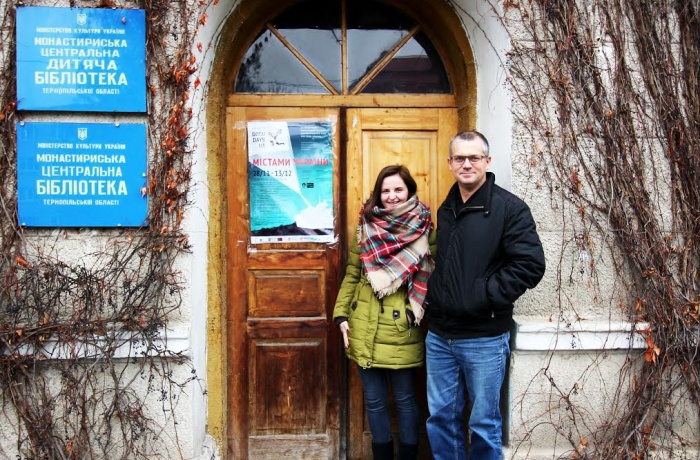 The title "The Domino Effect" lures film directors for some unfathomable reasons. It seems not so long ago that at least two Effects came out, both of them were Russian: a historical film and a melodrama. This time Polish directors Piotr Rosołowski and Elwira Niewiera called their documentary film The Domino Effect. Last year it was a success at the Kraków Film Festival and received a special Award of the Polish Society of Cinematographers.

We ordered The Domino Effect deliberately: we believe that the film will be insightful not only for Abkhazians. But for Ukrainians too. And not only from the Crimea and Donetsk.

The Travelling Docudays UA took a dare to screen this film in a library of the town of Monastyrysk Ternopil region. Why a dare? Historical background of Georgian and Abkhazian wars during the last ten years has been badly forgotten. Moreover, we have always perceived them as something far-away. Something that we will never have to face… Younger generation scarcely knows anything about them at all. Whose fault was it and who was right? How can one understand? Taking a dare we expected that librarians would try to gather elite audience. I won’t say that we played the wrong card. Though some spectators were certainly perplexed: why had the film-makers been beating around the bush for such a long time while the truth was self-evident and not declare it from the very beginning: “The Kremlin stroke together nations of Caucasus and with their blood paid the price for keeping the empire impact!”

There was also the following question: why the film didn’t mention a single word about the fate of majority of Abkhazia population who had been forced to leave the country due to ethnic cleansings?  But it is not quite like that: characters of the film try to avoid speaking about the fate of their former neighbours Georgians, who became refugees – the topic is too painful. Instead operator’s camera constantly turns to empty windows of abandoned houses. Those empty windows are like eyes of the all-seeing conscience: “Where is your brother, Cain?” That’s why it is so difficult to build your happiness on ashes of other people’s houses. To cut a long story short, The Domino Effect worked: the film bewildered and caused a heated discussion. And this is what was needed.

At the first sight the central library in Monastyrysk doesn’t seem poor in new publications. However, taking into account what the book stock consists of in village libraries we can understand very well how “capable” they can be in raising respect for human dignity and human rights in particular and also fulfilling the requirements of the law “On denouncing the Communist and Nazi totalitarian regimes”. That’s why within the Travelling festival we committed ourselves to distribute humanistic and legal publications. Thus, we presented to libraries in Monastyrysk and Koropka some books: by Yevhen Sverstiouk, Vasyl Ovsiyenko, ShimonRedlich, Mina Deutsch, etc.

Moreover, there was a video plot demonstrated dedicated to Oleksandr Gliadielov’s exhibition “You See, My Brother?” A Docudays UA volunteer from Kyiv Inna Dzyndra shared her impressions from the festival this year. Our girl has no doubts: big audience interested in human rights documentary cinema has already grown on the capital city pavement. It is growing on our fertile soil too despite the fact that some people consider such films quite useless.