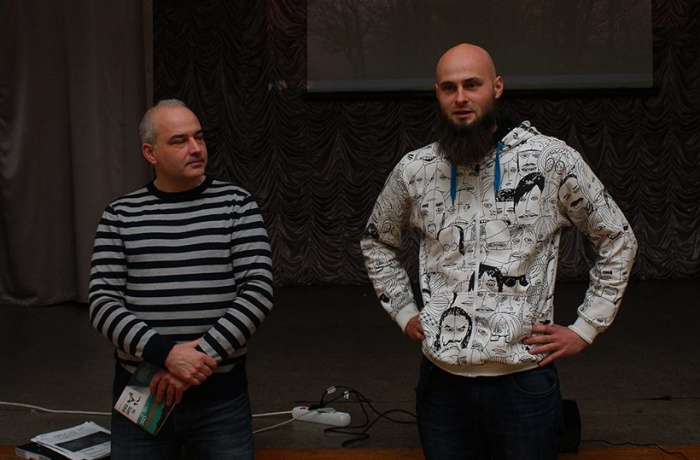 The most remarkable event within the Travelling Docudays UA in Zaporizhia was the arrival of a Czech documentary film-maker Jiří Stejskal. The winner of the ХІІth Docudays UA International competition personally opened a series of screenings by the Tavelling. His film My home touched the audience so deeply that after the screening they gave the director a standing ovation.

Jiří Stejskal was born in the Czech Republic, received his Master degree in Film Direction at the Baltic Film and Media School in Tallinn and shot his first full-length film about Ukraine. My home is a film portrait of one unusual and even extraordinary family in Kyiv which tries to rescue their house and yard from dense development of the area with high-rise buildings. First as a short-length film it became one of the most successful Czech documentaries abroad in 2011. The film received several awards at international festivals, attracted producers and finally grew into an hour and a half length film which received Audience award at the ХІІth International Docudays UA in spring this year.

The ХІІth Travelling Docudays UA started in Zaporizhia on 15 November – election day. And this is quite symbolic and somewhat symptomatic. On the background of low election activity a discussion about human rights, concern and responsibility in the modern society became especially critical.

After the screening the audience admitted to have watched the film in the same breath. Naturally, the main character of the film, Natasha Yurchenko, excited the biggest interest. “Nataliya is a mother with many children, a woman with a very strong maternal instinct. At once at the beginning of the film she attached priorities in her life: her main happiness is her children. This is the reason why she doesn’t want simply to change her way of life and move to a four-room flat … and leave Kyiv, she fights foot and nail (which should be mentioned as extraordinary) to get official status for these 70 Ares for her big family…  It also occurred to me that people have rights to live as they consider the best for them. It’s not necessarily to resemble others, and even those who live in the near-by in multi-storeyed buildings” – shares her impressions Lyudmila Gekkieva, a constant “Skhodzhennya Film Club”goer.

The film by Jiří Stejskal reminded the audience of local problems. As certain “pit-holes” exist in Zaporizhia too. Thus, for twenty years already local authorities have been promising to demolish old, dilapidated houses situated not far from the central avenue and to rehouse people into modern multi-storeyed buildings. “There were ideas against such “pit-holes” at the discussion…. Why don’t they demolish old shacks in Gryaznova street, for example? But how can it be done? As there are people who live there! However, nobody lives in the sky-scraper built behind the circus… Then let forced migrants from Donbass move to it! Let everybody get a wonderful, fairytale abode…” expresses her mind on this issue Olga, a spectator.

The personality of the film-maker didn’t leave the citizens of Zaporizhia indifferent. The audience took special interest in reasons which influenced Jiří Stejskal to choose a Ukrainian subject, his relationship with the Yurchenkos and what happened to them after and whether a similar story could possibly happen in the documentary film maker’s homeland – the Czech Republic?

It is the 8th time that the Travelling Docudays UA is held in Zaporizhia. The constant partner of the festival is “Skhodzhennya Film Club”. During this period Docudays UA in Zaporizhia grew from a one-day screening to an entire film tour within the town and the region. Thus, this time Travelling screenings took place in seven different locations in the region center – these are the largest local high schools and libraries. In general during a week twelve films shot by documentary film-makers from the Czech Republic, Belgium, the Netherlands, Hungary, Poland, Russia, Germany and the USA were demonstrated.