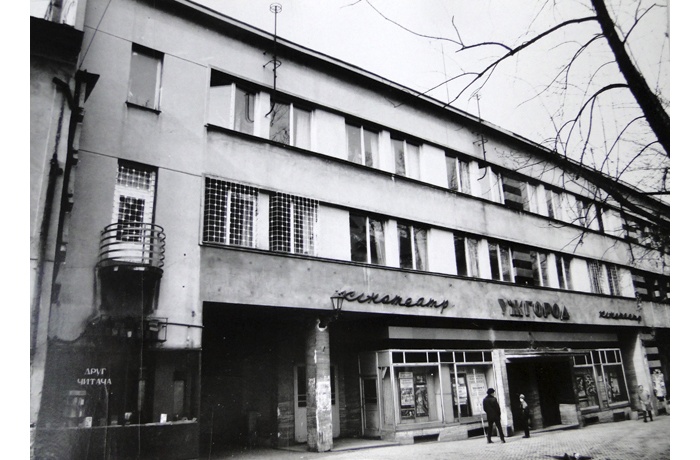 At the end of October, in the last days of the Traveling Docudays UA in Transcarpathia, there was a screening of the film Audience Emancipated: The Struggle for the Emek Movie theatre. The film discussion was attended by the journalist Tetiana Literati and the researcher of architecture Lina Diehtiariova, who prepared a presentation about the preservation of historic and architectural heritage in Uzhgorod.

“The film’s plot resonates with the recent events in the centre of Uzhgorod, where a modernist architectural monument is being thoughtlessly destroyed by its new owner,” notes Lina Diekhtiariova. She is talking about the iconic Uzhgorod movie theatre. The film theatre’s building, designed in the Art Deco style, was constructed in 1932 based on the project of an architect from Kosice, Ľudovít Oelschläger*.

The three-storied building of the movie theatre is characterized with flawless proportions, straight lines and angles. In its architectonics, the project can be considered a part of the functionalist current, but the building has some elements characteristic of Art Deco and some details reminiscent of expressionism. Ľudovít Oelschläger added some exquisite luxuriousness to the facade of the Uzhgorod town film theatre, using stripes of stained glass in black and greyish-purple colours. In addition, this decorative touch visually emphasizes the linear structure of the windows and optically widens the facade. The glossy texture of the material resembles the shiny surfaces of Broadway theatres, the ultramodern Hollywood chic of the 1930s.

The sign reading “KINO” was made of neon tubes mounted on a shield, which produced blue or red light. This sign, unfortunately, did not survive to our days. 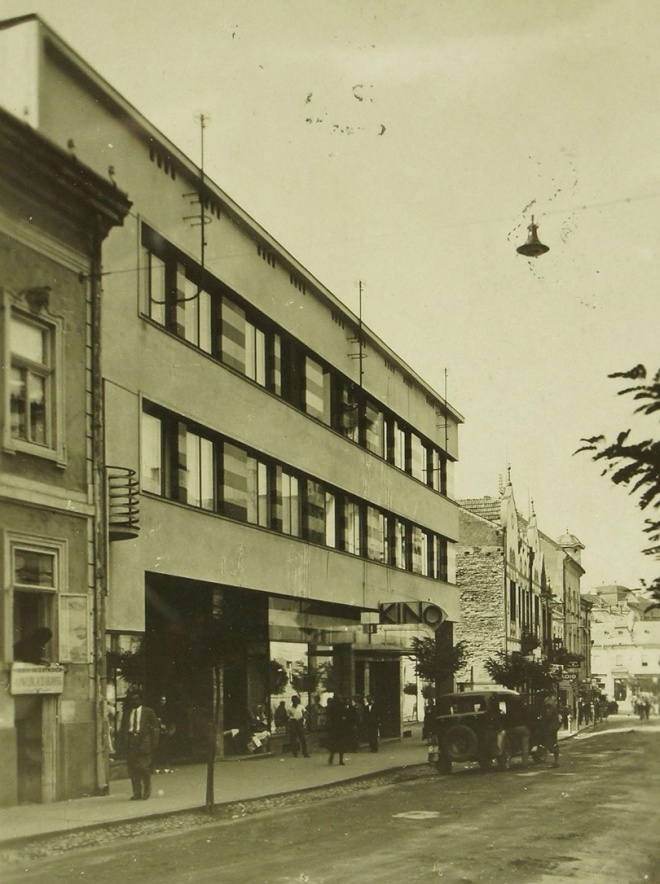 The Theatre at the beginning of the 1930s 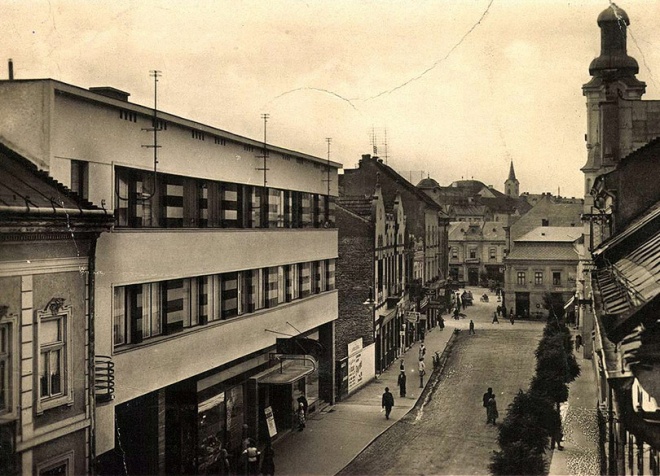 The building interior was decorated in the Art Deco style. The film theatre lobby and partially the audience hall were decorated with stained glass tiles.

In the Soviet period, the film theatre building underwent considerable changes. The most important loss was the near-complete disappearance of exquisitely stained glass tiles from the window partitions. The elegant and visually lightweight metal roof of the main entrance was replaced with an unfortunate concrete copy. The striking difference in the quality of work by the Czechoslovakian and the Soviet builders can be seen with a naked eye — the concrete porch roof started to crumble a long time ago, but all the corners of the 85-year-old building are armoured with artificial stone and remain in perfect condition. 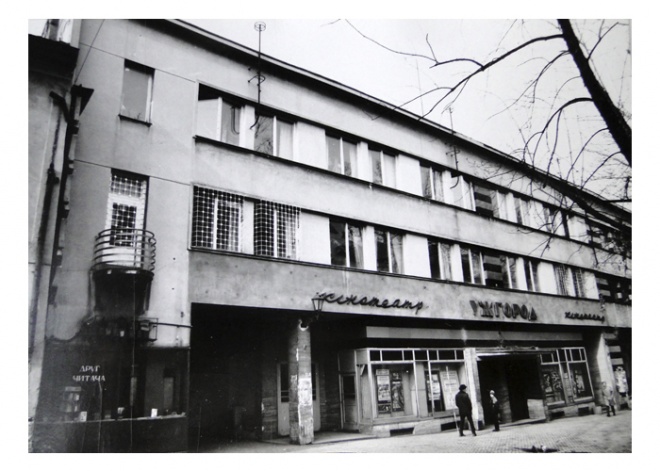 The Present Condition of the Theatre

At the present stage, the film theatre building is continuing to be under the influence of the negative tendencies that started in the Soviet times. Today, Oelschläger’s expressionist masterpiece is in a lamentable condition.

Some of the building’s rooms are rented for commercial purposes, which couldn’t have left it unharmed — the original bronze door and a part of the travertine cladding were brutally destroyed. The travertine column and the entrance to the left of the central volume of the ground floor are covered with cheap signs and banners of a fast food store. The windows beside the entrance are blocked with advertising banners. The panorama windows of the left, “library” side of the facade were replaced with plastic windows, and to make things worse, metal bars were installed on them.

The largest part of the complex, its right side, where the film theatre was located, was sold to a private owner by the previous city administration in 2012. This moment became the starting point of the complete decay of the theatre. 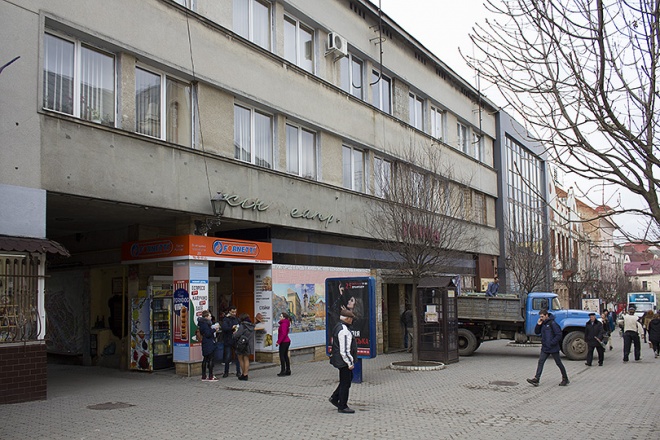 The Present Condition of the Theatre

It should be noted that the film theatre is a part of the Castle Mount development complex, which has the status of a monument of local importance. The complex is located in the area outlined by Korzo and Pidhradska streets, the Koriatovych square, and the Botany Boardwalk. It was given the cultural heritage status by the decision of the Regional Executive Commission No. 35 of February 5, 1980. The protection number of the monument is 090003 / 1-M.

Today, the Uzhgorod film theatre, the prominent creation of Ľudovít Oelschläger, is under the threat of destruction by its private owner. However, there is another way. Although unfortunately, not all the details of the building’s exterior and interior are completely preserved, the theatre can still be restored to its original shape. It needs restoration, and the building should go back to its original function, with all the necessary technical precautions. Otherwise, the community of Uzhgorod will always have the right to return, through joint action and protests, the neglected architectural memorial to the municipal property, which is clearly and unequivocally presupposed by the Law on Protecting Cultural Heritage.

* Ľudovít Oelschläger is a famous Czechoslovakian architect of Hungarian origin. His Hungarian name was Lajos Őry. He was born in Kosice in 1896. His most famous works include the synagogue and the Jewish school in Kosice, the Kosice film theatre Slovan, the sanatorium in Tatranska Polianka, the city hall in Michalovce, the building of the trade and industry chamber in Kosice, the Capitol film theatre in Michalovce, the Scala film theatre in Mukacheve and others. In Uzhgorod, he designed the following projects: the town film theatre, the Jewish cultural centre with a school, the town swimming pool, the water supply service building.

This article is based on the text by Lina Diehtiariova and Oleh Olashyn with the permission of the authors.

For more details on the history of construction and the special characteristics of the film theatre’s architecture, see this link.