To Pause and Seek Responsibility

To Pause and Seek Responsibility 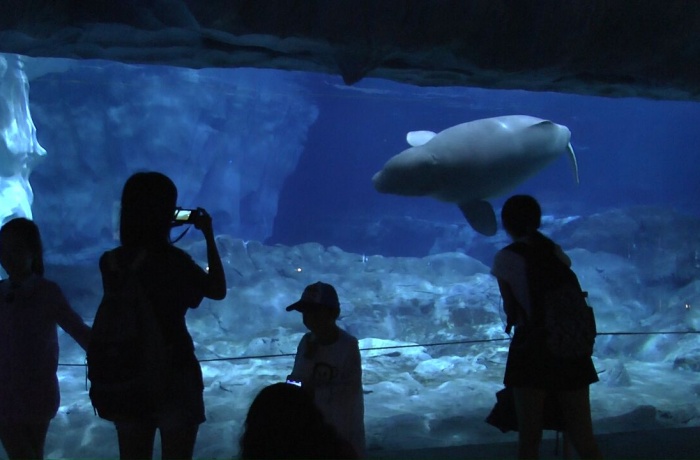 This year’s Docudays UA poster features an animal, and its topic is about the relationship between humans and nature. Environmentalists are sounding an alarm: living species are dying out because of one global problem — the climate change. Yosh, the curator of cinema hall of the Lviv Palace, is thinking about personal responsibility regarding ecological problems, how paternalistic sensibilities are connected to social life and political tendencies.

It feels like a malicious irony when people die because of natural disasters in the age of Anthropocene.

Another strange circumstance is that humans, again and again, are trying to prove their superiority, either in hunting or in using nuclear weapons. The first example of this that we’ve seen at the Traveling Docudays UA was in the film The Nature of My Heart, and recently the Ukrainian audience had the opportunity to watch the film Safari, in which the director Ulrich Seidl studied the motives of reach Europeans’ hunting. Seeing the absurdity of killing for a trophy, the heart of an animal rights activist is squeezed with pity and hate. Can it be that a contemporary human being really cannot find other ways to satisfy their ego? 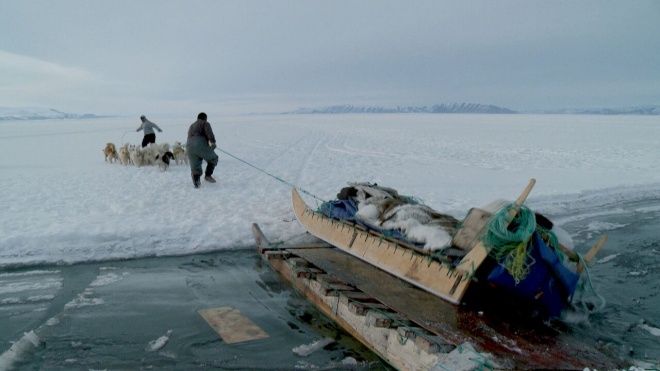 However, there is another opinion. The environmental activist Diana Popaflushi describes the changes in her attitude to hunting throughout her life: as she was growing up in the Carpathian mountains, hunting was an integral part of the culture and leisure of her family. Then came the rejection of any acts of killing animals, and then the moderate attitude that considers all the circumstances. “All the reservations for animals are artificial, and they need hunters, because the processes of natural regulation no longer happen there; help is required,” says Mrs. Diana now.

In the film Born to be Free, we can hear the saying, “Human is the king of nature.” That is how the dolphin coach explains how they can keep mammals in a pool. Using the resource of another living being for dolphin therapy or children’s entertainment seems reasonable. And you really have no objections if you look at the 3D model of the world with the human in the center. If you look at it at an angle, it gains volume, and you can see that it’s a pyramid, a hierarchy where the will of the dominant descends upon the subjugated. The human will is to care for our “little brothers,” which also allows us to decide instead of them what would be better for them.

Societies just cannot come to terms with the idea of individual freedom and everyone’s right to have a choice (I suggest we ignore the capitalist version of the freedom of choosing what to buy at the supermarket). The right to choose your gender, your line of work or whether to work for money at all, your sexual or asexual preferences, your marriage institutions or children.

Paternalistic sensibilities manifest here and there, together with the support of conservative and authoritarian governments.

It’s interesting how political tendencies reach the most private corners of human relationships. Two years ago, we started a conversation with social pedagogues Yulia Boyko and Oksana Vyniarska about maternal care for children. We considered a situation with a child who has the severe disability, cerebral palsy, in the film The Kangaroo Complex. But in the end, we traced the typical behavior patterns: the more attention the mother pays, the more she gives, the better mother she is considered to be.

Instead of overprotection and the practices of power and control over children, families start to employ in the process of bringing up children the models where carers and educators listen to the child’s needs and give them the freedom of choice. The film Approaching the Elephant, which we watched in 2016 at the Traveling Festival, gives an example of this approach. Small children at school are involved in making all decisions, in creating a study plan and in conflict resolution. 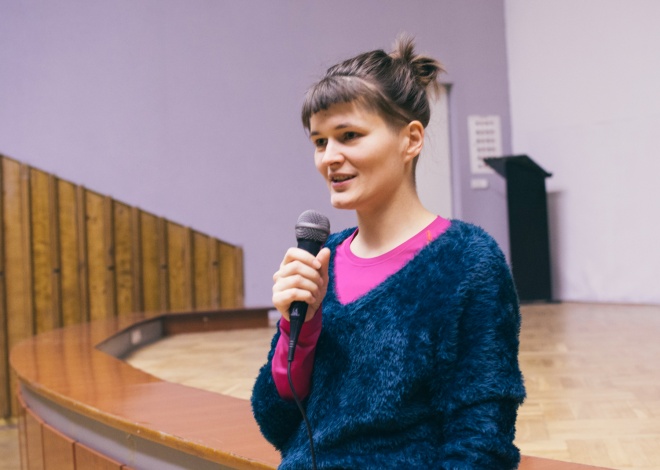 Yosh, the curator of cinema hall of the Lviv Palace

The wind of freedom always runs into obstacles created by conservative sensibilities, which flourish in the period of economic uncertainty and impoverishment and make people want to return to the seemingly more certain patterns. An important place in the political discourse of the Ukrainian right is occupied by the regulation of the institution of family and reformatting of the female and the male images. They offer women to play the role of a child carer, and it must be their main occupation. Given that in the times which the conservatives are appealing to women had 5 to 10 children, and now they, on average, have only two, the amount of attention per one child increases many times. And this way, the conservatives motivate mothers to be overprotective.

This year, Oksana Vyniarska and I watched the film In Another World, which shows the difficult choice faced by a Polish woman pregnant with a baby with Down syndrome: should she give birth or not? Mrs. Oksana noted that every life has value, regardless of its physical state and health. But in Mrs. Oksana’s experience, nobody wants to give birth to children with disabilities, so do they apply other values while planning the pregnancy?

The conservative government of Poland offers other values to women. Motherhood is treated as a mission the woman owes to the society, which must be carried out within strictly established limits: put on warm clothes, feed well (with breasts — but not in public!), teach masculinity or femininity, and, in the end, create working hands which would fit well into the social slot prepared for them. Therefore, the national government treats children as its resource, and women as a supplementary force tasked with preparing this resource for use.

With this description of power relations, I want to go back to thinking about the Anthropocene. Here we can already see that in this system, people are above animals, and some people are above others.

According to Adrian Ivakhiv, the idea of Anthropocene works best as a warning to humanity against the possible consequences. The emphasis is not on the endless possibilities and human power over the earth, but on responsibility for the subjugated: both the elements of nature and animals and the people who are still oppressed (visibly or invisibly).

But where can we find a place for this responsibility in the conditions of the structure of democratic states with their delegated power? Democracy is representative, and therefore the responsibility for global (or national) processes is born by us as citizens only indirectly. Diana Popfalushi in her everyday practice tries not to participate in the processes which cause the global climate change or simply treat animals cruelly, such as cosmetic product testing and delivery of goods by air mail. But her individual actions do not really influence the general picture, in which several oligarchs develop the strategy of energy development. Mrs. Diana says that the most effective method is lobbying for change on the legislative level and making the issue relevant to the population. And human rights activists keep insisting that, as citizens, we have the right to demand that the state is responsible for our welfare. 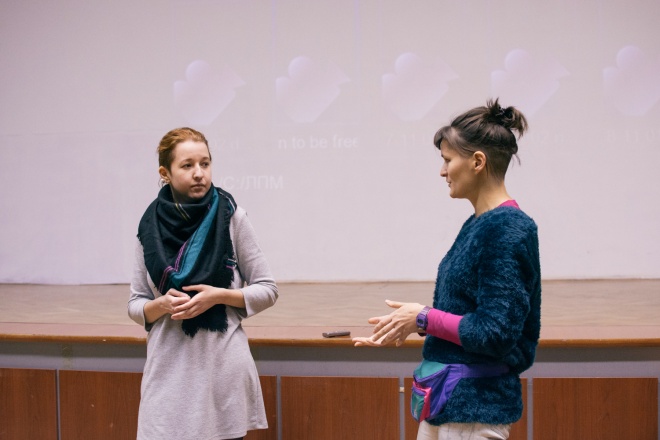 Another argument against personal responsibility is the incorporation of the ideal of the individual into the neoliberal and destructive value system. But should we reject it together with all the practices of individualization?

Zygmunt Bauman and Leonidas Donskis speak about the total and invisible evil. Philosophers draw attention to the destructive processes that happen in the world because responsibility is dissolved in the society, split between small actions and half-steps, whose agents do not see the connections. Bauman points out that the evil itself in the contemporary world is difficult to trace and define, because it isn’t solid but liquid in form, or more precisely, in formlessness. Similarly elusive are the “lords of the world,” who no longer sit on thrones in the castles of hierarchical pyramids, but travel the world without borders and obstacles and disappear quickly.

Shutting down borders and using archaic methods against wrongdoers doesn’t seem like a very successful and promising attitude to me. But I can invite you to watch them, exercising your responsibility in this way. And pause to think about the processes characterized by fleetingness, to reveal the features of Bauman’s evil in them… using the opportunities provided by documentary film screenings.

The main photo: Still from Born to be free film by Gayane Petrosyan