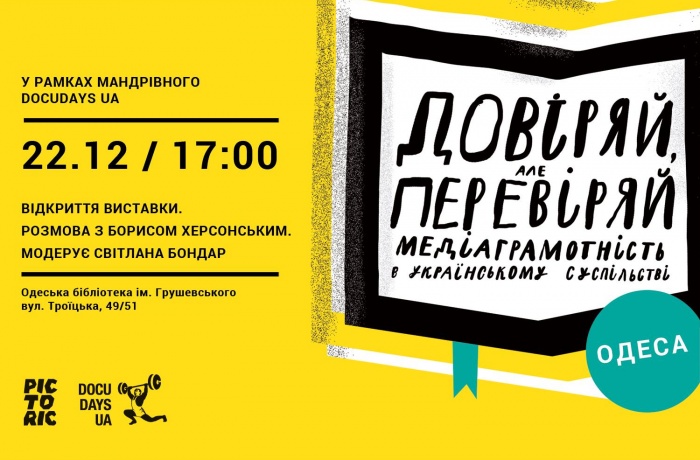 On December 22, we invite you to the opening of the exhibition Trust, but Verify, which is a part of the Traveling Docudays UA in Odesa. The exhibition will present the works by artists who are thinking about the condition of the media and media literacy in the Ukrainian society.

The first people to see the works from the project Trust but Check were residents of Kyiv — this fall, there was a street exhibition on the Vaclav Havel boulevard in Kyiv. 30 stands along the boulevard exhibited works by Ukrainian artists from the Pictoric Illustrators Club, which speak to the topics of censorship, propaganda, freedom of speech, fake news, information war, critical analysis of media messages, connections between power and the media, social networks, and social television.

Now residents of Odesa also have a chance to see the exhibition at the Hrushevsky Library (49/51 Troitska str.) as a part of the Traveling Docudays UA.

“In Ukraine, critical attitude to media messages is not sufficiently developed, especially in the regions. For example, in the south and in the east of Ukraine, only 15 percent of people notice concealed ads, propaganda or prejudiced materials on national TV channels, and 12 percent notice it in national online publications*. We want to emphasize the key principles of media literacy and present them clearly for the mass audience, so we choose the visual poster language, which is capable of delivering the message effectively, and reinforce it with professional journalist comments,” says the co-founder of the Pictoric Illustrators Club and an artist Oleh Hryshchenko.

The project Trust but Check. Media Literacy in the Ukrainian Society was supported by the Ministry of Foreign Affairs of the Czech Republic, as a part of the Transition program. The project also involved publishing a book with artistic works and journalistic articles about media literacy. The audience will also have a chance to look through the book during the event.

The Pictoric Illustrators Club is a community of illustrators, graphic designers and artists. They create joint projects and involve in them various talented artists from different countries, in order to popularize high-quality contemporary illustration in Ukraine and abroad, at international festivals and book fairs (including the International Festival Book Arsenal, Tbilisi Book Days, International Festival of Posters and Typographic Design Plaster in Torun, Poland, Frankfurt Book Fair and others).

*Based on the results of the second wave of research of the media situation in southern and eastern Ukraine, carried out by the Institute of Mass Information and GfK Ukraine in spring 2017.