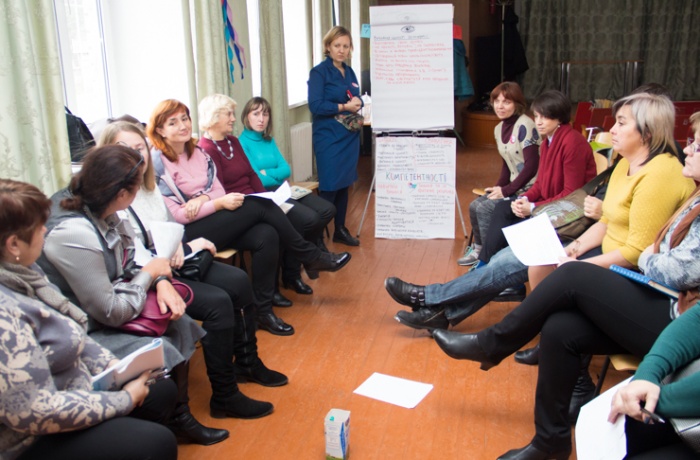 Between November 19 and 25, Kremenchuk hosted screenings of the Travelling Docudays UA. Which means that our long-awaited favorite season started: working without days off, meeting new and old partners, and human rights events. This year, the Travelling Festival’s human rights events in Kremenchuk included the youth workshop on human rights and non-discrimination, the workshop for teachers about civic awareness, and women’s conversations about both women’s and not women’s world (and whether they exist at all).

On November 10-22, there was the workshop for everyone who wanted to learn more about human rights and non-discrimination.

“What is the connection between human rights and non-discrimination? What do stereotypes, jokes (which are not funny for some), biases against women, men, the white, the black, the green, the thin, the fat, immigrants, the HIV positive, ex-convicts, Russians, gays, lesbians, transgender people, homeless people, people with disabilities, Roma, old ladies, your nasty neighbors… or anyone else have to do with it? Why human rights concern you and me both?” 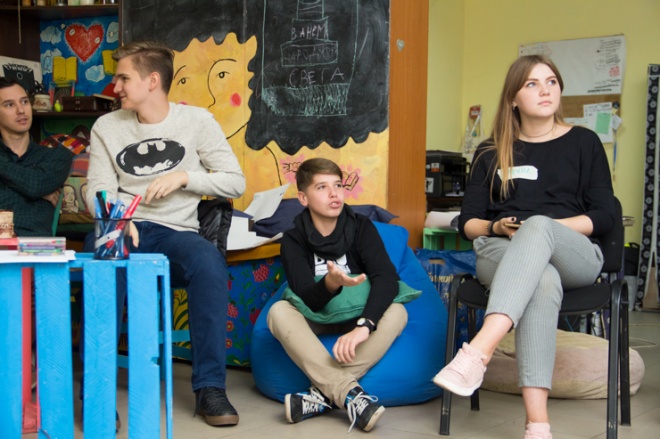 This is how we planned the discussion. Some of these things were even done better than expected, and some weren’t even approached in the conversation. The group of participants was very diverse: some of them were regular visitors of the Space of Ideas; a few people came with specific human rights questions; high school students for whom this was the first time in their lives when they attended an informal educational event, so it was unusual for them.

Nevertheless, we managed to do many things:

- discuss how stereotypes are formed and how they affect us;

- find out where discrimination comes from and whether it exists around us;

- learn more about our own stereotypical ideas and responses;

- study the contents of the Universal Declaration of Human Rights in considerable detail;

- think about where and when we encounter human rights violations against ourselves or others;

- watch a video about discrimination and human rights;

- look for ways of counteracting discrimination and human rights violations; 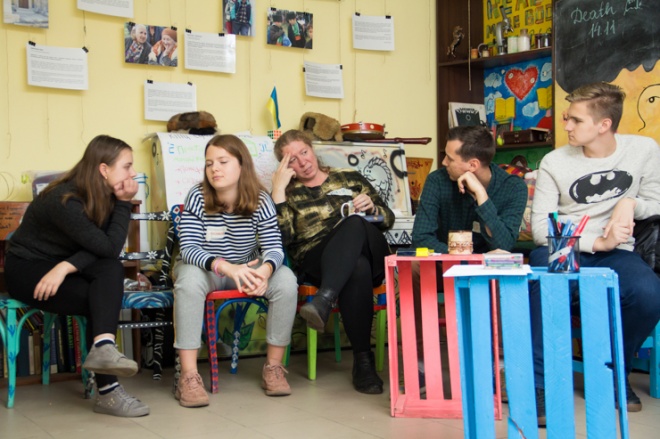 We believe that the participants weren’t scared off by the human rights topics and will come to future festival events.

On November 15, there were two festival events on the same day. In the morning, there was a workshop for teachers from Kremenchuk schools, who are responsible for teaching Civic Competence skills. And in the evening, volunteers studied sign language.

The Civic Competence turned out to be a complex topic. It seems that everybody should know everything, but it’s difficult not so much to understand, but rather to explain and assess. We started with learning the components of Civic Awareness, and tried to make a diamond out of them and justify our choices. We managed to do it rather peacefully and quickly. We tried to reach an agreement about who and how can suggest the rules that govern the school life. 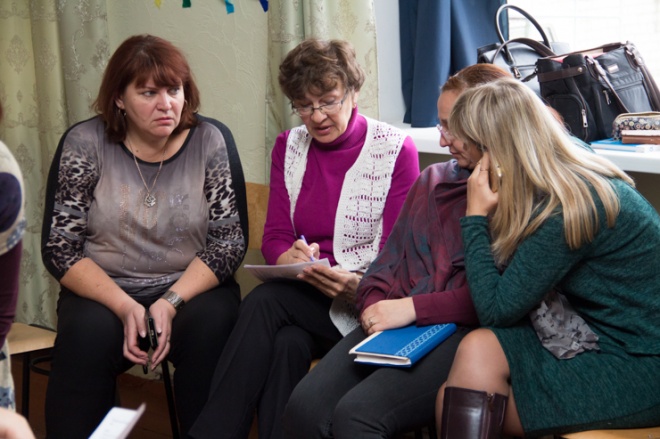 And then we started talking about the Framework of Competences for Democratic Culture, suggested by the Council of Europe, and the descriptions of the competences. For Ukrainian educators, it’s a fundamentally new approach: to learn how to describe the acquired competences (values, attitudes, habits and skills, knowledge and its critical evaluation) in order to get a “change map” in the end, rather than a sentence in the form of a grade.

It was difficult to deal with the descriptions: difficult to articulate a vision and understanding, to separate the essential and meaningful from the obvious and non-crucial. It was hard to design actual steps that would allow to shape certain competences. Probably the most defining topic of the day was the competence for accepting uncertainty. In any case, it was the most discussed during the concluding reflection. And the tutor are still discussing it.

In the end of the workshop, the participants recalled/learned about the new changes in the Ukrainian education legislation; many people argued about the role of teachers in the changes. They learned about the new roles of teachers (coach, facilitator, moderator, tutor, mentor) and thought about how much a teacher should know and be able to do. The participants summarized their feelings about the workshop, their takeouts, and said goodbye to each other with a hope for change. We thank everyone who came and took the training. 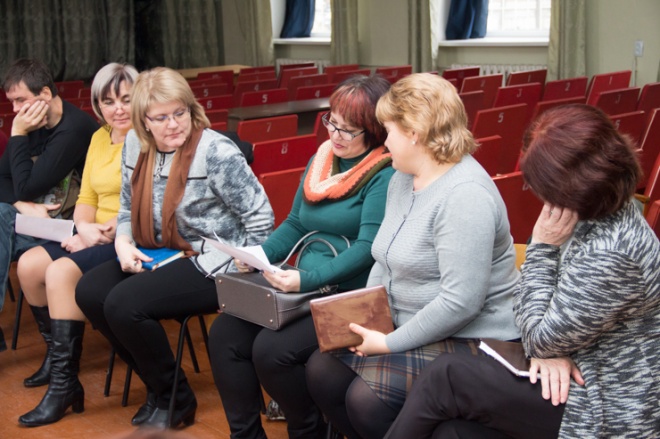 And in the evening, the Space of Ideas hosted a class on a thing which is absolutely new for us: a sign language class. To say it was unusual is to say nothing. Some people felt their fingers hurt, some had a headache from trying to understand and remember everything. In the background, children were making quiet noise and mischief, while their mothers and grandmothers were studying. And only that noise prevented us from hearing the crackling of tearing patterns and ruining stereotypes.

For example, the stereotype that people with hearing impairments are unhappy and withdrawn. Or that they are the only ones who need sign language, or at most their families. Or that it is boring and hard to learn, so you can only make yourself learn the things that will bring you money/fame/recognition. Less than two hours of studying, and the results were positive emotions, realization of achievement, new skills and new acquaintances for everyone present. We are already planning the next workshops. 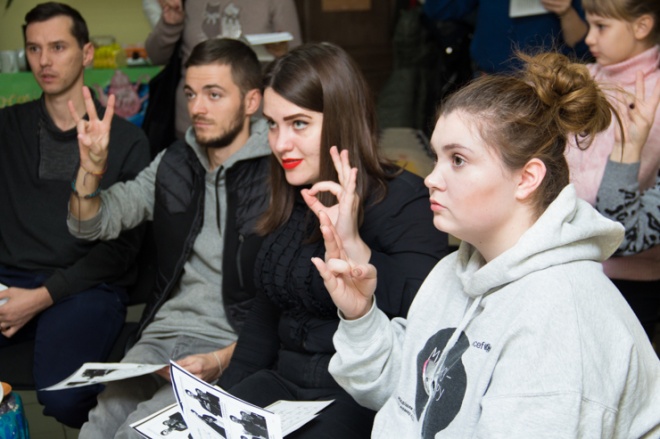 For another week, until November 30, Kremenchuk will have the interactive exhibition Everyone Has the Right to Know Their Rights at the city’s secondary schools No. 20 and 23. And on November 17, there was a training for the exhibition’s tour guides. With Natalia Zhebryk, the tutor at the Civic Chamber of Ukraine NGO, young people practiced their knowledge and skills related to human rights and the philosophy of human rights, and practiced their future tour speeches.

- Women are talkative, their conversations are about chores, children and their appearance.

- Men are brief, measured, and too busy to talk. With one meaningful word, they can convey more information than endless women’s chatter.

Some people still seem to think this way. But not the Sunday’s guests of the Space of Ideas. There were many of them: about two dozen women and girls, and two guys. They talked both live and by Skype about the real and fictional differences between men and women. 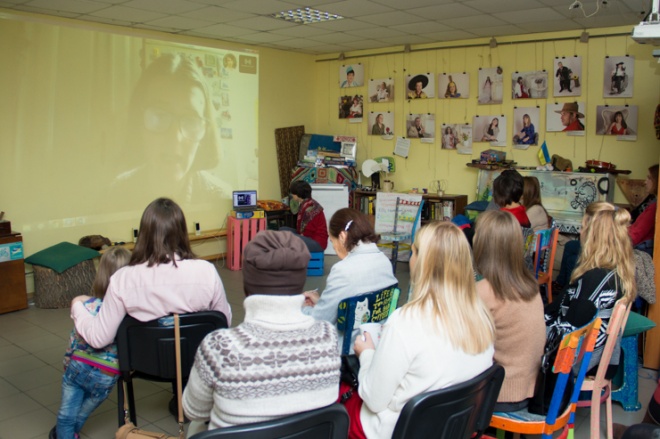 For some, it was a great discovery that women are mentioned in school textbooks ten times less often than men. Others never thought about how the majority of workers in education and the bureaucratic apparatus of the local government are women, while the majority of managers are men. Few were ready to admit that the barriers only exist in our head, insisting that there are differences in bodily shape, physical strength and endurance. There were arguments and disagreements, but there was no aggression and unacceptance. More than four hours of conversation didn’t left anyone indifferent and inspired the participants to learn more. Our speakers, who talked about themselves, shared information about opportunities, surprised and motivated other participants, were:

- Hanna Zaremba-Kosovych, PhD in Social Science (Lviv), about gender stereotypes and a study of local governments in terms of gender equality;

- Viktoria Kulinich, Olena Marusina, IT project managers, about girls and women in IT.

- Alisa Bazhukova, a world kickboxing champion and 15-time champion of Ukraine in kickboxing and Thai boxing; Ira Filinska, a bronze medalist of the Ukrainian Championship in shot put, about sports and girls;

- Olia Pavlenko, the founder and manager of the Koliorovo Art Studio, teacher, artist;

- representatives of the employment center about employment opportunities for women in Kremenchuk. 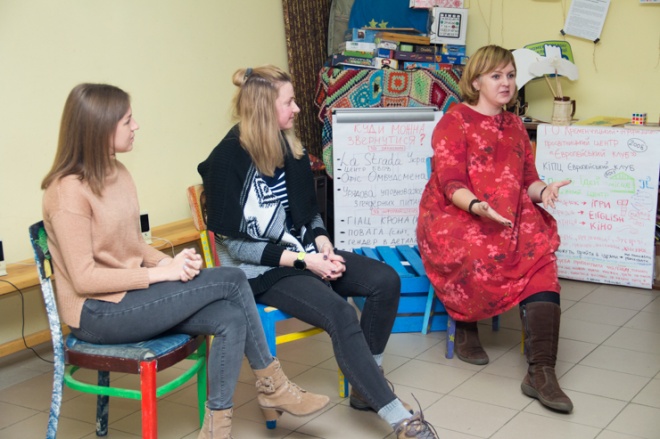 We hope that everything that happened improved the understanding of human rights, their philosophy, and this year’s festival topic, equality.

The Festival’s partners in Kremenchuk: