The LGBT+ Community and Schools. Opposing the bullying of the LGBT+ community was discussed at the Travelling Docudays UA in Kremenchuk

The LGBT+ Community and Schools. Opposing the bullying of the LGBT+ community was discussed at the Travelling Docudays UA in Kremenchuk 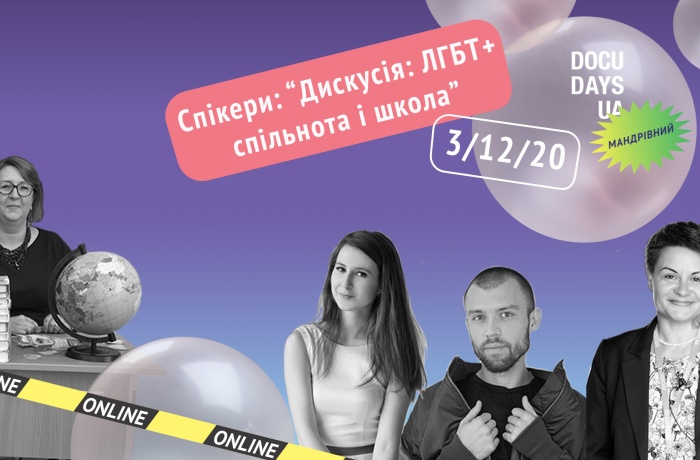 At the Travelling Docudays UA in Kremenchuk, there was an online discussion about The LGBT+ Community and Schools. Six speakers from Kyiv, Zaporizhia, Kharkiv and Myrhorod joined the conversation: Larysa Horyslavets, a journalist; Anna Sharyhina, the vice president of the Kharkiv Women’s Association “Sphere”; Oleksandr Cherkas, a teacher and the founder of Don’t Bully NGO; Darya Poltavska, the director of the Helicon Education Complex in Myrhorod; Tina Sobko, a staff member of the LGBT NGO Gender Z. The discussion was interpreted into sign language. We are going to share the key points expressed during the event here. You can watch the recording of the event at this link.

Before the Travelling Festival, the Kremenchuk Information and Education Center “European Club” published a series of flyers prepared during interviews with members of the LGBT community about their school life. And since the topic of this year’s festival is Teen Spirit, the issue of the challenges faced by LGBT teenagers could not be ignored.

Not only adults, but also students expressed interest in the event. The latter asked the most questions during the discussion: “When did the first LGBT people appear in the world?”, “When will people stop bullying the LGBT in Ukraine?” In short, there was a discussion.

The organizers divided the discussion into three blocs: LGBT people and society, school, family. The conversation started with the question of why LGBT rights are human rights. Unfortunately, even educators in the Ukrainian society often question this. According to the national survey on “What Ukrainians know and think about human rights,” 33% of educators believe that the rights of the LGBT community can be limited in some circumstances, and 12.5% believe that “undoubtedly, they should be limited.” Where does this idea come from and how? During the discussion, Anna Sharyhina, the vice president of the Kharkiv Women’s Association “Sphere,” explained the mechanism of discrimination based on any characteristic and used simple examples to prove that the potential threat of facing discrimination can affect any of us. How do we prevent or change this? What depends on the teachers when it comes to the school environment? Tina Sobko, an LGBT activist and human rights advocate, said that teachers’ interest in the topic of LGBT is very high: educators want to know more in order to respond to frequent cases of bullying of LGBT teenagers.

In 2019, a national study of the school environment was conducted. A survey of young people who identify as members of the LGBT community showed that 88% of them experienced verbal bullying, and 53% experienced physical bullying. Oleksandr Cherkas, a teacher at a private Kyiv school and a co-founder of Don’t Bully NGO, spoke about this.

How can teachers support diversity in schools and develop respect for it? Darya Poltavska, the director of the Helicon Education Center in Myrhorod, noted in her remarks about this: “What do I do to prevent bullying? I’d rather say what I don’t do. I don’t send a child home to change if they’re wearing ‘weird’ clothes. I don’t comment on their hair or makeup. I don’t give tasks to children based on their gender.” According to Mrs. Poltavska, in Ukraine, children are brought up with gender stereotypes from birth, and established patterns are imposed on them already in kindergarten: “We need to break the cycle of stereotypes and focus on the fact that we’re bringing up people, not boys or girls separately.”

Psychologists’ approach to the problem of bullying is universal, either for LGBT children or for members of other stigmatized groups. Professionals are usually familiar with the algorithm of action, reminded Natalia Huliayeva, a psychologist and an LGBT activist who consults the parents of LGBT people. At the discussion, the specialist explained how teachers should act if an LGBT child or an LGBT teacher approaches them and comes out.

The discussion participants were especially interested in listening to the representatives of the Tergo parents’ initiative. Anna Medko, one of the co-founders of Tergo, spoke about her experience of accepting her adopted gay son and about the young man’s complex path to self-realization.

The discussion evoked interest among educators and parents, which signifies that there is a developed demand for accepting diversity in society.