Open offence on free speech! Screening of film on Yanukovych and his residence was disrupted by "bomb"

Open offence on free speech! Screening of film on Yanukovych and his residence was disrupted by "bomb" 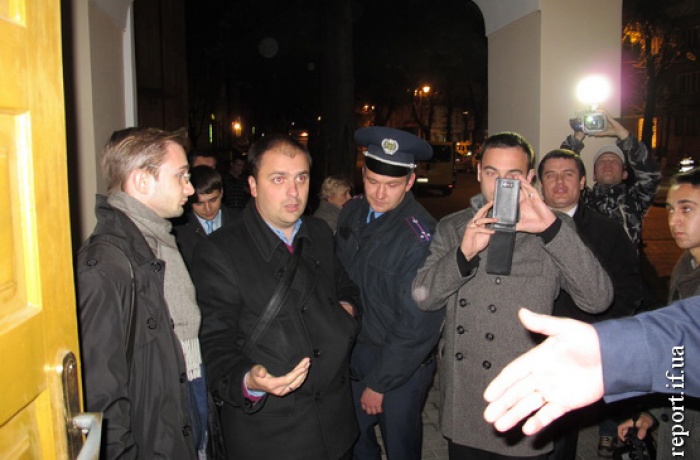 Before the screening of the anthology "Open Access" Natalia Sokolenko, social journalist from Kyiv, explained that there were several attempts to derail its demonstration in different cities of Ukraine. The same thing happened this time: after the first part of the film was shown, police broke into the cinema hall explaining that it was mined, – according to “Reporter”.

"Open Access" had to be shown in the cinema "Lumiere" in Ivano-Frankivsk. But there was no explication of this failure. The cinema staff was confused and claimed that they hadn’t heard anything about this event. That is why it was decided to change the location to “Prosvita”.

"Our colleague Alisa Ruban was detained at the airport Boryspil while carrying this film to Berlin –Natalia Sokolenko told before the screening. Agents of the security service have impudently copied the movie to their computer. They have seen the film and now they have, so to speak, the proof that the community activists "defame" the President and that we show things, he would have preferred to remain silent about. But we do not want it.”

The Organizers promised to hold a discussion and explain the main points of this law on access to public information after the first part of the anthology.

"After all, the film is about the law, which was already approved by President Viktor Yanukovych,” said N. Sokolenko. “We are thankful for that. We had requested this law to be adopted, when Yushchenko was the President and Tymoshenko was the Prime Minister, but it wasn’t done at that time”.

The audience manage to see only 2 films ("Mezhyhirya" and a part of the short film “The Afghanistan Veteran”). The police did not allow them to continue watching the movie.

The lawmen explained that they had received information about the bomb. The audience was asked to leave the cinema hall. So the “explosive” caused the failure of screenings in several cities of Ukraine.

The crowd wanted to continue watching the movie and expressed their readiness to sacrifice their lives, in case when the explosive was really there. However, people eventually had to go outside." They stood in front of the entrance to “Prosvita” chiming “Shame!”

The police promised to examine the room and to let people continue the screening.

However, after an hour of waiting, activists decided to watch the movie in the middle of the street. The film was projected on the wall of the school № 7, next to "Prosvita", so that the policemen were able to see the anthology too.