Serious films are appreciated in Zaporizhia

Serious films are appreciated in Zaporizhia 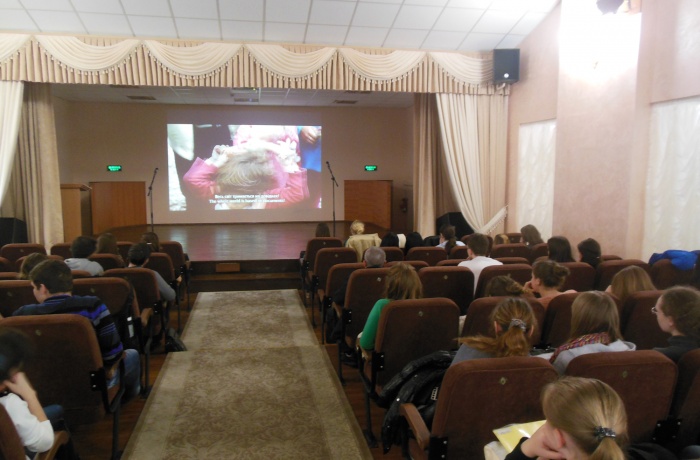 During the last week the screenings of the films on human rights were held in Zaporizhia as part of the Travelling Film Festival Docudays UA. It was not for the first time that the festival was held in our city. But this year, the number of the cinema halls and spectators has considerably increased.

Many festival movies have caused quite active discussions both on their main topics and artistic value. According to the organizers, the festival does not aim to give a definite answer to the raised questions, but to make people think. And judging by the audience’s feedback, we have succeeded at it.

Oleksandr, regular participant of the cinema club “The Ascent” (Skhodzhennia): “The movies that we watch within the festival incite us to think things over. Whatever is the opinion of several or most viewers, these films warn us”.

Kira, student of KPU: “I think we need to show young people the problems of our time, and how they can be solved. And everyone has to do whatever they can, for example organizing this brilliant festival that makes people aware of such things. The problems that we can see in this video are very deep, for example the issue of slavery”.

Oleksyi, visitor of the open space Old Rabbit: “I’ve really enjoyed these movies. While some of them were quite difficult to watch, they made me thinking. I was particularly impressed by the heroes of "Roma Dream" and "ABC," who try to change their lives despite the circumstances and achieve something, often against the treatment of other people. So I’ve got also some positive emotions after the screening”.

The organizers themselves (the cinema club “The Ascent” and NGO “UkrProstir”) are satisfied with results of the  event. Although, according to them, there is still a large amount of opportunities for the festival in our region. For example there are screenings in almost every big city in numerous locations of the Crimea.

Mykola Kolodyazhniy, co-organizer of screenings in Zaporizhia: "It is very important for our organization to take part in the events organized by Docudays UA. We tried to show the films to the different categories of viewers. All in all, people from Zaporizhia highly appreciate such a serious kind of movies. We hope to expand the festival geographically and to hold screening not only in our city, but at least in several cities of the region”.