Docudays UA is awaited in Kremenchuk

Docudays UA is awaited in Kremenchuk 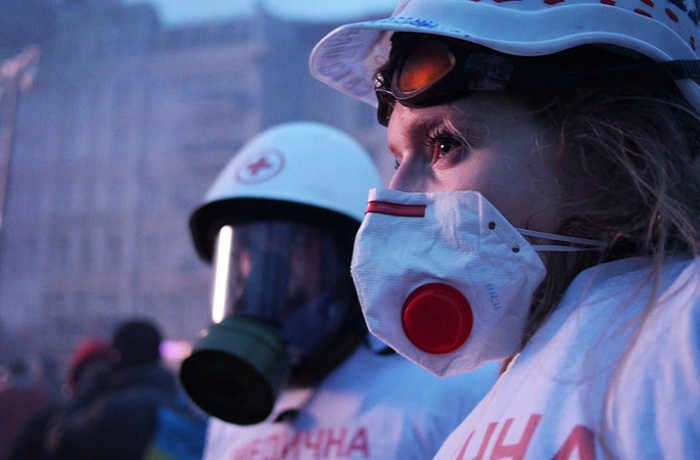 In Kremenchuk Poltava region people are getting ready for Docudays UA International Travelling Human Rights Documentary Film Festival. Festival organizers – Kremenchuk informative-educative center ‘European club’ activists – plan to start screenings on 17 November with already famous movie Euromaidan. Rough cut (in the picture) and present 18 best documentary films from different countries and Ukraine during 7 days. As this festival is an extraordinary and significant event for Kremenchuk, which is an important industrial center in Poltava region.

Her first festival experience four years ago regional coordinator Alyona Glazkova recollects with a smile, hardly more than a hundred of spectators came to screenings. However hard and continuous work in the next years brought its results and already in 2013 the audience increased to 794 spectators. One pleasant fact is, as remarks Alyona Glazkova, that own festival enthusiasts appeared: ‘Now people look forward to new films, visit us and inquire the festival details’.

It is interesting to know that the festival attracts people of different age and activity. Previously screenings were attended by pupils, students, educational and cultural workers and even elder people longing for cultural events. Oleg Ovcharenko, head of Kremenchuk informative-educative center ‘European club’ expects that this year after the Revolution there will be not only quantitative but also qualitative changes in the audience: screenings will take place in a new country. It will be interesting to see how residents of the new country will perceive such films’.

This year organizers will show films on different subjects – from Ukrainian facts till ‘dark side’ of the city of dreams Las Vegas. Screenings will take place in a picturesque place 'Space of ideas' (office of Kremenchuk informative-educative center ‘European club’), libraries and educational establishments. It is important that some films will be projected also in Komsomolsk and Oleksandria, industrial towns of Poltava and Kirovograd regions where there is a big lack of cultural and human rights events.

Besides film screenings, festival team also actively elaborates a diverse program of human rights events. Members of European club already conducted a seminar on human rights and also plan to organize forum-theatre and a ‘living library’. Forum-theatre is a mini-performance where all willing can participate and while ‘playing’ participants try to find means to solve a problem or a difficult life situation. And in the ‘living library’ festival participants will be able to communicate with ‘living books’ – representatives of those communities who often suffer from prejudicial attitude in the society (Gypsy, Muslims, Africans, etc.). As a rule personal communication dispels social stereotypes, myths and prejudices thus, ‘living library’ is an effective means to fight violence and prejudices.

Such variety of methods informing on human rights is aimed to help festival participants  develop critical thinking and evaluate human dignity as the supreme value. As Oleg Ovcharenko remarked: ‘We aim to change the world for the best. For this reason it is important not only to know and understand human rights but also to be able to apply them in real life’.