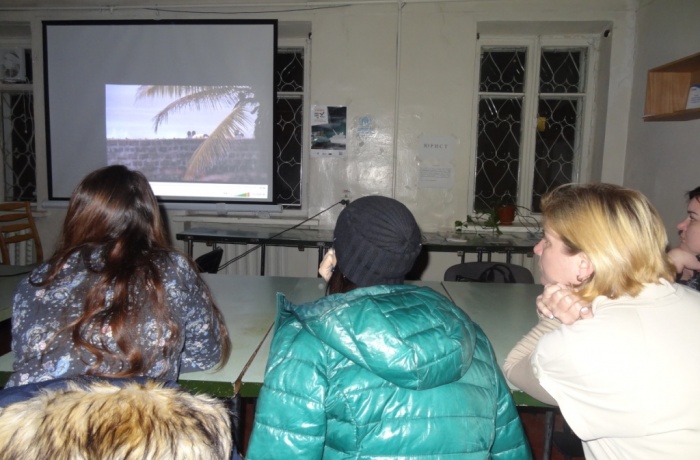 A seminar “Docudays UA screenings organization in Kharkiv region” for partners from voluntary service organizations who work with forced migrants took place on 27 November in Chuhuiv.

The event took place in the premises of Center for support and consultations for forced migrants “Chuhuiv station” which operates on the basis of Chuhuiv Human Rights Protection Group. Among the invited there were representatives of voluntary service organizations involved and also forced migrants who chose Chuhuiv and Chuhuiv district as a place of their new residence.

One of regional coordinators of the Travelling festival in Kharkiv Region - head of NGO "Center for Legal and Political Studies DUMA” Yuriy Chumak addressed the audience. He told the story of the Travelling Docudays UA, he also spoke about methods of legal education for the population by means of documentary cinema describing human rights and shared his best-practices in this field.

The striking film directed by Ryo Murakami and Judd Ehrlich Notes from Liberia, was demonstrated to the attention of volunteers and forced migrants which is dedicated to cruel living conditions and labor practices in the Firestone Tire and Rubber Plantation in Liberia. Coercive labor practices still exist in the country which was called “the Land of Freedom” at its foundation, however now the population is free to decide whether they want to join it.

While shooting a film about the present of Liberia, one of its directors risked a lot (armed guards banned the trespass on the territory of the company) and finally having caught malaria he gave up his life for the possibility to show people the truth.

The film moved the audience and caused a heated discussion.

“The film is definitely good. And I believe everybody should watch it. In order to understand how people of their own free will can practically turn into slavery: not knowing another way of life they work the whole year round having only one day off on Christmas. They are mercilessly exploited. And this all happens not in the slave-owning period but in the times when people invented tablets, smartphones, space ships… However, we still have no recipe how to avoid barbarian exploitation of other people and nature”.

“It just doesn't make sense taking into account the high level of life in developed countries how in other corners of our planet people can exist under such miserable conditions. The film says there are people who don’t want to stand this but either they can’t escape this “cage” or aren’t active enough. The film caused ambiguous feelings: on the one hand I’m very sorry for people who live under such conditions, on the other hand – the film makes us think that something must be changed. Not only in Liberia. Changes are required in this country too.