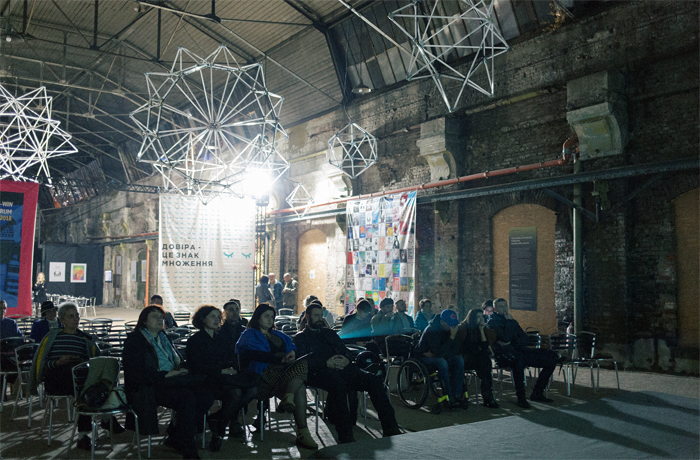 On October 18, The Other Side of Everything by the Serbian filmmaker Mila Turajlic opened the 15th Travelling International Human Rights Documentary Film Festival Docudays UA in the Lviv Region with a conversation about the dialogue between generations in turbulent times. In this report, we talk about the topics discussed during the first two-week wave of the festival.

The Dialogue between Generations in Turbulent Times

The location for the start of the Festival was the Territory of Terror, the memorial museum of totalitarian regimes, whose main exhibition is about the loss of home and begins in a Lviv pre-war apartment whose residents experience all stages of terror: interrogation, search, deportation, prison, return home, and survival.

The protagonist of the presented film, The Other Side of Everything (Serbia, France, Qatar, 2017) by the Serbian filmmaker Mila Turajlic is also filmed inside an apartment. It is her home, which was separated with a wall when she was a child and populated with supporters of the opposing totalitarian regime. The filmmaker initiates a conversation with her activist mother — about the revolution in the country, in which she actively participated, about its consequences, about the personal responsibility of intellectuals in turbulent times. “Do young people have to stay and keep up the cause of their parents? Do they have to continue to live in their family apartments?” These are some of the most painful questions which the filmmaker asks the audience and her mother. 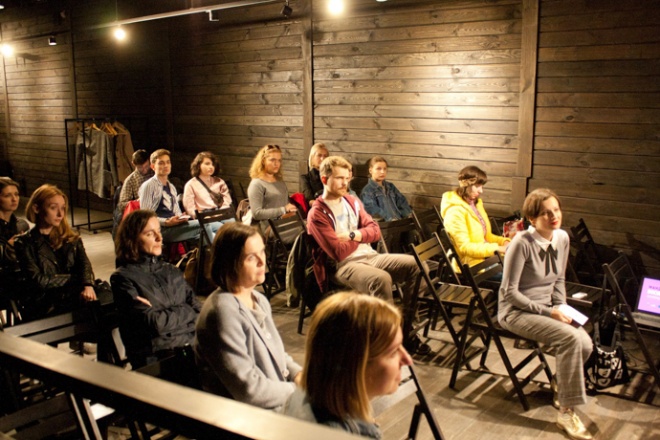 Oksana Darmoriz, the cultural researcher, joined the discussion of the film. “The film shows the story of Yugoslavia through one person, through one apartment. As the film’s protagonist notes, each apartment contains a part of our common and individual history,” says Oksana Darmoriz.

The cultural researcher cites the philosopher Jan Assman, who distinguishes between two types of memory — communicative memory, which passes history on for 80 years from its direct carriers, and cultural history, which is told, and sometimes imposed, by the society. The latter shapes us directly, but at the same time our life experience allows us to look at history from our own perspective.

Thus, the film is no longer a conversation between the child and the mother about life, it turns into a conversation with the audience about the life and transformation of the whole country, Yugoslavia, which ceases to exist in the end.

It is no accident that the museum had been picked as the location for the film screening, since its main exhibit is also an apartment whose history exemplifies the fate of Lviv and its residents before and after the World War II. The conversation continued with a discussion of the presentation of history in museums, because today it is important to form exhibits that can reach the visitor’s emotions and evoke sympathy, which creates the platform for the comprehension of the general history through an individual, private story. The audience discussed the Territory of Terror Museum’s “apartment method,” which developed independently from the film, as well as the experiences of the Berlin Wall Museum and the Krakow Schindler’s Factory Museum, whose exhibits primarily present personal stories unfolding in totalitarian circumstances.

PTSD and Childhood during War

The goal of the first Biennale of Trust in Lviv was to create an open platform for reaching a wider understanding of the concept of trust; therefore, the films selected for the event programme were about the topic of war as the catalyst of (dis)trust. The Biennale participants watched and discussed the film No Obvious Signs by Alina Gorlova (Ukraine, 2017) about a Ukrainian military officer who is undergoing rehabilitation for PTSD caused by her participation in the Anti-Terrorist Operation (ATO) in Eastern Ukraine, and returning to life in a peaceful city. 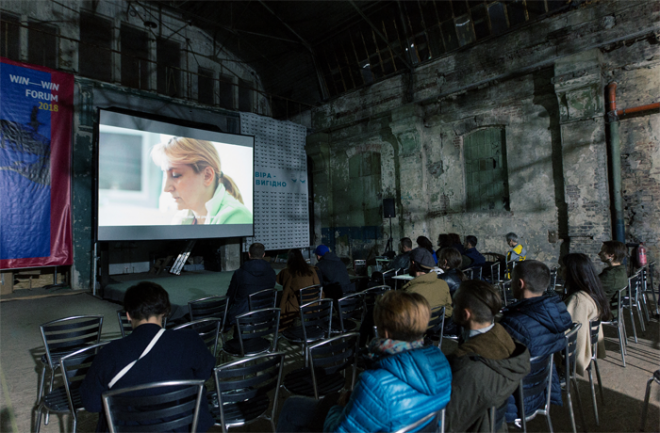 The conversation was moderated by the psychologist Yulia Kunta, who raised questions about overcoming the wall between people who have and have not been through war, since after they return home, most soldiers face the problem of losing interest in life, their family or friends. Bohdan Kukharuk, a volunteer for the Harpoon battalion, also joined the discussion. “Emptiness and the condition of the film’s protagonist precisely convey the feelings of people coming back from the war. I could not return to the work I did before the war. I changed my job. I know many people like that.”

Bohdan Kukharuk added that the gap was much wider than the film shows. “You return to your family, to the relatives, but at the same time you don’t return to them. You come to your friends, but at the same time you don’t. All the time, there’s the question of why he/she died, and I didn’t.” The participants of the conversation also talked about the loss of satisfaction from the work you do, the loss of emotions and the perception of time. 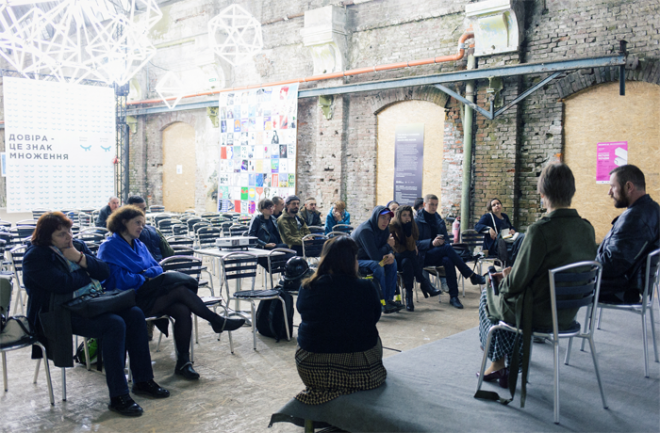 So, after all, who should take the first steps to overcome the wall? The former military man gave an example of working with foreign instructors who have some practice in transferring soldiers to transitional rehabilitation camps before they go home, and emphasized the importance of strict rotations in the army, which allow to mitigate the process of war-to-home transition. What Bohdan Kukharuk himself found helpful was time and sports.

The film The Distant Barking of Dogs by Simon Lereng Wilmont (Denmark, Finland, Sweden, 2017) shows the life of people in a village on the separation line between the free and the occupied territories in Eastern Ukraine. The film focuses on children who are growing up during military fighting but decisively refuse to leave their homes.

During the discussion, the artist Alevtina Kakhidze aptly noted that we feel empathy for the protagonists’ stories because we are all actually in this situation: we find it hard to change our everyday routines. One of the protagonists complains that she cannot make jam because of the shelling: these simple moments detail the everyday routines and their importance for people. 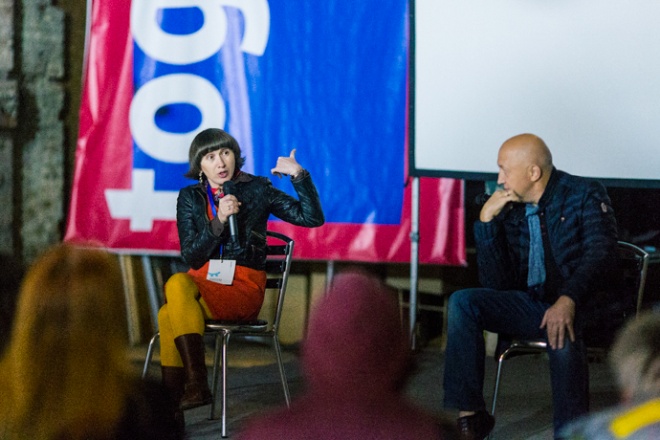 “People are not furniture which you can just move,” emphasizes the artist. “The most important thing is to think about what we can do for them wherever they want to be, and we probably have time for that, since we’re talking about it now.”

The discussion participants noted the lack of specialists capable of working with children who suffered from the war; but at the same time, the worst things are the silence and avoidance of conversations about the war in our everyday life.

Oles Pohranychnyi, the headmaster of the School of the Free and Caring, added that “When we speak of the children of war as a ‘new phenomenon,’ we must understand that it’s not so new. My mom is a child of war: her father, her grandfather died. This phenomenon is, first of all, unarticulated. It has not been in our active vocabulary for a long time, and if we talked more about the children of the ‘previous’ war, maybe the situation today would be completely different.”

Decommunization and the War of Symbols

In the film Holiday by Zhanna Maksymenko-Dovhych (Ukraine, 2017), presented in the Prison on Loncki Street Memorial Museum for the Victims of Occupation Regimes, the residents of a southern Ukrainian town walk out on a May 9 demonstration. Blue-and-yellow flags, poppies and “Georgian Ribbons” are all over the streets. The “Glory to Ukraine” slogan drowns in “Thank you grandfather for the victory!”, the streets are loud from fierce discussions about the European or, possibly, pro-Russian (Soviet) path for Ukraine, old ladies are trying to break through the crowd to bring flowers to the Unknown Soldier memorial, but they are stopped by the police.

All of this is happening in the same city, on the same street, at the same time, on the same holiday. The film vividly demonstrates the war between the “new” and “old” symbols which is unfolding in the contemporary Ukrainian society. 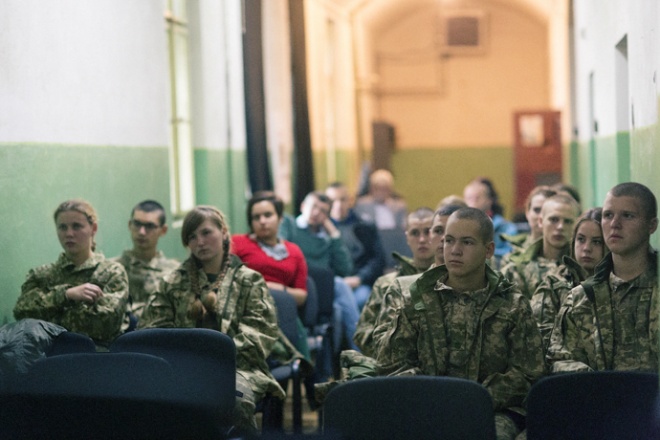 In the context of decommunization processes, the speakers talked about the contemporary methods of propaganda which originate in the Soviet period. In particular, the museum’s director Ruslan Zabilyi spoke about the origin of the May 9 holiday. The Victory Day was not celebrated right after the victory in 1945, because there were many veterans and eyewitnesses who did not want to talk about war in the context of victory at all. The day became a holiday to be celebrated with pomp in the 1960s, when there were fewer and fewer actual soldiers, and the myth of the “Great Victory” by any means necessary grew to the all-USSR scale and became the main glue of the Soviet Union. Soon, the “immortal regiment” appears, that is, the tradition to herd young people holding portraits of their veteran “grandfathers” in a parade as a symbol for the continuity between generations and the preservation of tradition. The key mark of this celebration was the “Georgian Ribbon,” also known as the “Colorado Ribbon” in Ukraine, because its colors resemble the Colorado potato beetle. The Ribbon originates from the system of Russian state awards of the imperial times. The Ribbon has been prohibited in Ukraine since June 2017.

By the way, in 2015, the government established the Day of Remembrance and Reconciliation on May 8. Ukraine started the new tradition of celebrating the 8th and 9th of May in the European spirit of remembrance and reconciliation, whose main symbol is the red poppy as the symbol of victims of all military and civil armed conflicts. The idea to use the red poppy as the symbol of remembrance belongs to Moina Michael who sold artificial silk poppies in support of the veterans of the World War I.

Thus, the carriers of different symbols and representatives of opposite views face each other on the same day, on the same street and discuss the present and future of the country, and in the context of decommunization the war of symbols becomes the war of worldviews. Although maybe it is just for one holiday.

Life Continues in the “Grey Zone,” Too

The logical continuation and the end of the first wave of the Docudays UA Festival in Lviv was the screening of the film Mustard in the Gardens by Piotr Armianovski (Ukraine, 2017) at the Lesia Ukrainka Academic Drama Theater in Lviv. The film’s protagonist Olena travels home, to a village on the frontline in the “grey zone” of the Donetsk region, where she spent her childhood years. 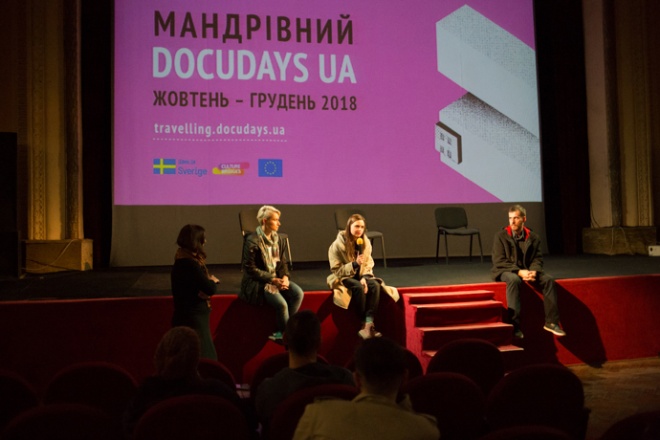 “Together with Olena, the audience find themselves inside the life of a small village on the separation line. Life goes on; the war is a circumstance, but gardens are planted, mustard is sown, apricots and tomatoes are canned. Through the story of a girl growing up, becoming wiser, analysing personal losses, the filmmaker ponders how we could learn to communicate, so that we do not lose our friends because of controversial topics, so that we remain neighbours. Because what is an ancestral home? Is it an exhibit, or an image of the Fatherland? And who benefits from the war?” That is how the playwright Iryna Harets summarizes what she has seen in the film.

We remind you that the public programme of Docudays UA in the Lviv Region will continue until November 18.