Post Release of Docudays UA in Lviv Region: The Mosaic of Thoughts and Experiences

Post Release of Docudays UA in Lviv Region: The Mosaic of Thoughts and Experiences 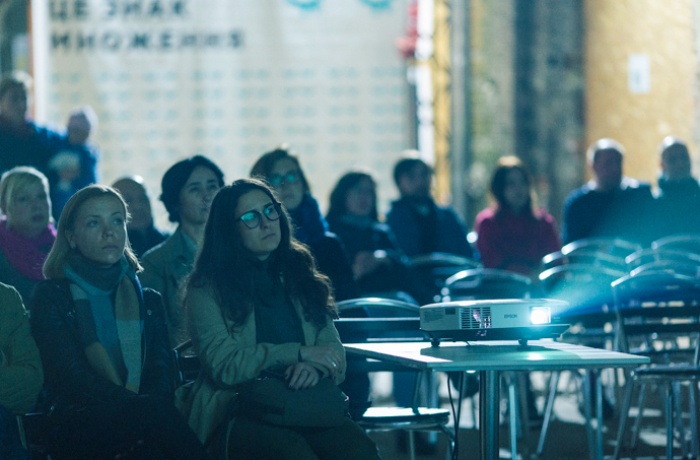 From the early October till the late November 2018, the 15th Travelling International Human Rights Documentary Film Festival Docudays UA was in Lviv Region. The first wave of the festival included public film screenings and discussions around the topics of intergenerational dialogue, PTSD, childhood at war, decommunization, etc. The second half was memorable for its children’s program, educational events and special events. Read about the “non-public” life of the festival in our report.

The star of the children’s program was the film My Happy Complicated Family by Tessa Louise Pope, which is about children who grow up in separated families. The film was discussed both among children and among teachers. According to Natalka Dobrianska, the curator of the festival’s children’s program, Docudays UA’s Equal Equalities topic provoked a discussion and revealed the problems with teachers and students’ understanding of equality today. 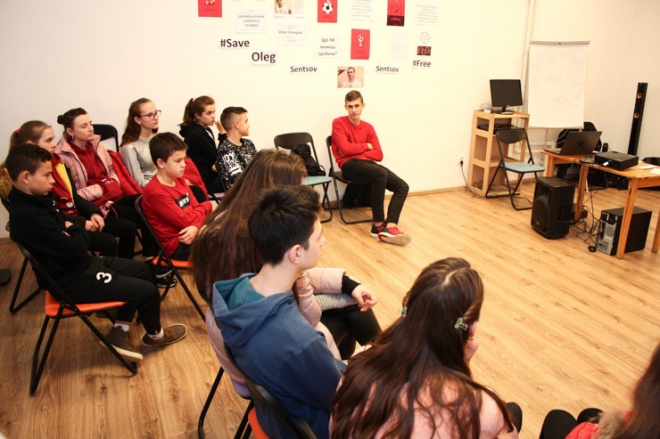 The children saw happy kids in the film, but teachers saw imposition of “foreign values.” As the children noted perceptively, the three teenagers were happy that despite the unfortunate circumstances in their lives they had the opportunity to communicate with both parents. For teachers, “equal equalities” were often limited to the right to free education and health care. What remains unrecognized is that today, in the curator’s opinion, equality is, first of all, the right to be heard, the right to dignity and non-discrimination.

Maryana Hevko, a children’s rights coach, also worked with students and teachers. During the discussion of the film’s themes, the participants emphasized the importance of preserving the relationship with the child and ensuring the participation of both parents in bringing up the child even after the divorce; however, the latter is not considered appropriate for our culture today. 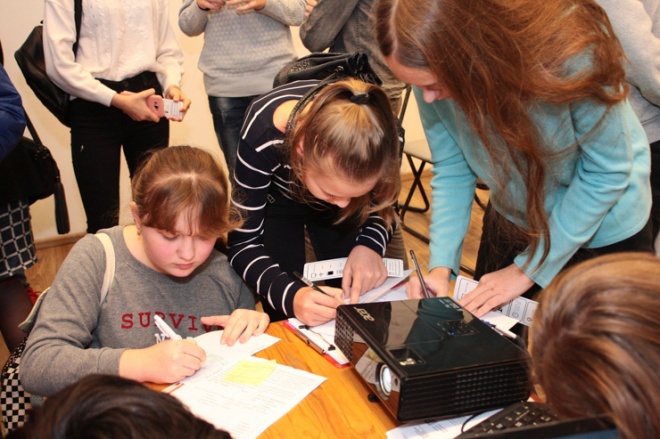 “The film and the discussion of children’s rights is very relevant for teachers, because they are the ones who work with children every day, who see their worries and difficulties, who communicate with parents. Thanks to the film and the organized discussion, we drew attention to the importance of family for the child, of the participation of both parents in bringing up the child, we discussed other possible forms of family upbringing if biological parents are absent, discussed the main tasks of parents, how we could monitor whether parents fulfill their duties, what kind of support can be provided to parents and children,” said Maryana Hevko.

The coach collected some very “adult” children’s comments about the film. “It’s a very interesting and positive film. I liked the way they showed that the parents were unable to deal with the difficult situation and maintain the loving relationship with the child.” “I was surprised that after the divorce children can be happy maintaining relationships with both parents.” “In bringing up children, both parents are very important, and the film shows it well.” “It’s strange to see children who can be happy when their parents have divorced. I don’t know if it’s possible in our society, but it’s very cool.” “It’s a very interesting film, not ordinary families, but the kids are happy.” “It’s an inspiring, positive film. All the difficult situations can be overcome, what’s the most important is the support of your loved ones.”

For educators, Docudays UA organized a workshop on How to Work with Children from Minority Groups. During the workshop, the participants studied the concept of “minorities,” figuring out who can belong to a minority, and working out recommendations on how to behave with minority members. 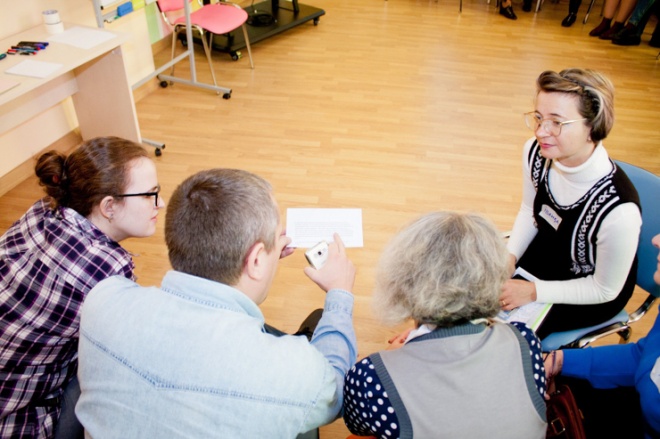 “The participants reflected on their own attitudes to various minority groups. On the one hand, there are regulations and the social culture of tolerance towards some groups; on the other hand, on the personal level we encounter stereotypes and biases which prevent us from creating conditions for personal development regardless of the person’s circumstances and experience,” said Yosh, a tutor in the issues of gender, feminism and non-discrimination and a member of the Feminist Workshop NGO.

Lawyers worked with the topic of Gender Discrimination: The Application of ECHR Decisions in Legal Practice. The workshop was organized by the YurFem Association of Female Lawyers of Ukraine and PRAVOKATOR Legal Club. At the event, moderated by Khrystyna Kit, the lawyers discussed the mechanisms of protection against gender discrimination in Ukrainian law, and the relevant questions of protecting women’s rights against discrimination. 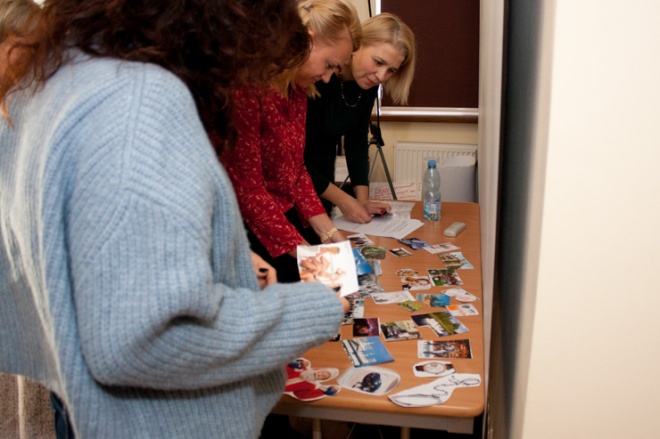 All the cases were considered and discussed through the lens of ECHR decisions in cases related to harassment and domestic violence. “The workshop combined soft and hard skills, which allowed my colleagues to put themselves in the shoes of a woman who may experience gender discrimination, as well as play the role of a lawyer and try to build effective communication with the client,” noted Khrystyna Kit, the tutor, lawyer, attorney, and PhD in Law.

Teleconference with Four Regions for Lawyers

On November 24, on the eve of the International Day for the Elimination of Violence Against Women, there was the first teleconference in the Festival’s history between four PRAVOKATOR clubs in Lviv, Kharkiv, Dnipro and Odessa; the participants watched and discussed the film Silent War by Manon Loizeau. “The film draws attention to the problems of sexual violence against women. Rape, forced sexual encounters, harassment, etc., are not just isolated cases in Ukraine — and not only at war,” noted Khrystyna Kit, the head of the YurFem Association of Female Lawyers of Ukraine. 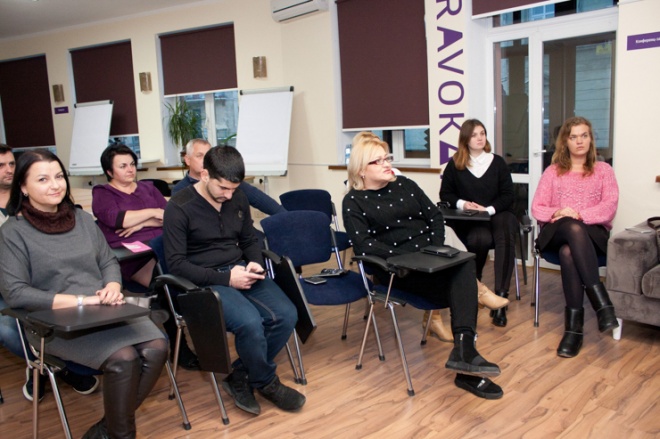 As they discussed the questions of protecting the rights of survivors, members of the legal community noted the following problems: biases against survivors on the part of law enforcement officers and the society in general; formal approach to investigating sexual violence crimes; limited court practice, particularly few successful cases of protecting the rights of survivors; need for knowledge and skills in human rights protection and effective communication with survivors of sexual violence, etc. 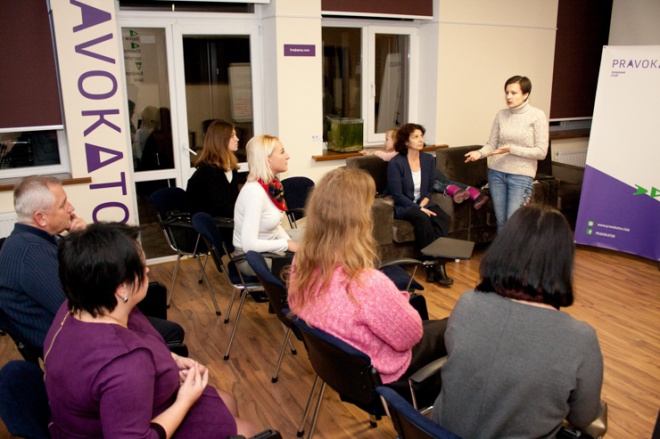 “It’s important for us that we have raised awareness about this problem in the legal community, so now we can plan our further joint steps to improve women’s access to justice,” summarized Khrystyna Kit.

The Program of the Feminist Workshop NGO

The Feminist Workshop NGO demonstrated three films at the Lviv Regional Youth Center. The program’s curator Yosh, a gender, feminism and non-discrimination coach, presented a review of the screenings and discussions.

“The film No Obvious Signs, directed by Alina Horlova, speaks about several controversial and relevant topics. First, it is about the reasons for “voluntary” participation in armed conflicts. The film’s protagonist Oksana Yakubova, a former human relations deputy commander of a battalion, specified two reasons: her original reason was to go so that her son and husband aren’t conscripted (according to the ‘one of a family’ principle), and her second reason was to return to war because it was very hard to return to ‘normal life’ at home. Second, the film is about the role of women in the war or in opposing violence. Although women are often portrayed as someone to be protected or as a symbol of peace, in contemporary Ukraine the army is becoming a place for women’s self-realization, and they fight for the right to defend civilians as equals, together with men. However, what looks more promising is the radical change of the social order, in which the people’s will for peace will be taken into account at the level of political resolution of conflicts. 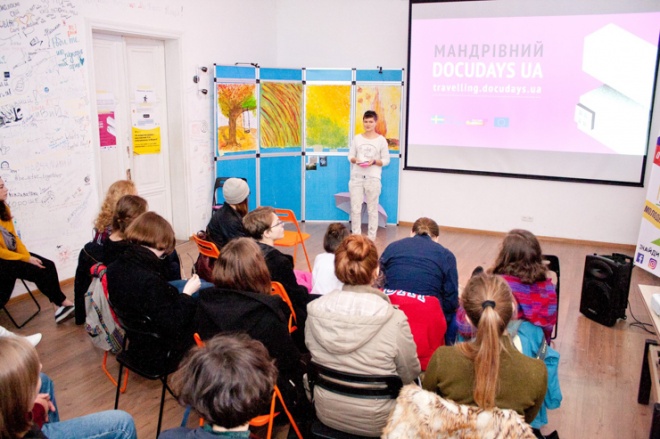 The film My Body Is Political by Alice Riff raises the problem of a stigmatized and invisible group of people in Ukraine. Scenes from the life of transgender people of Sao Paulo (Brazil) reminded us that, in our context, these people are often not visible, either visually or on the level of protective legislation. So after the screening, together with Yulia Kulchytsk_a, an activist of Women’s Voices Lviv activist and a trans-non-binary person, we figured out who is considered a member of the transgender community, what are the reasons and strategies of transgender transition for people, and what are the everyday and legal limitations they encounter in Ukraine. Although the world has some cultures which recognize the third gender or provide an opportunity not to indicate gender in documents, generally the problems are similar in most places, from Brazil to Ukraine.

The film Sieva by Jenni Nyberg is filled with dancing and contemplation of alternative strategies for people who fight systemic problems. Although the Finnish dancers don’t work with human rights issues, their thoughts and reflection inspired the audience to talk about opposing aggressive capitalism and developing trust in the society. According to the audience, the establishment of personal boundaries through the sieva dance leads us to understanding our own rights and dignity. These things must become the foundation for building harmonious non-violent relationships with other people and with the space around us." 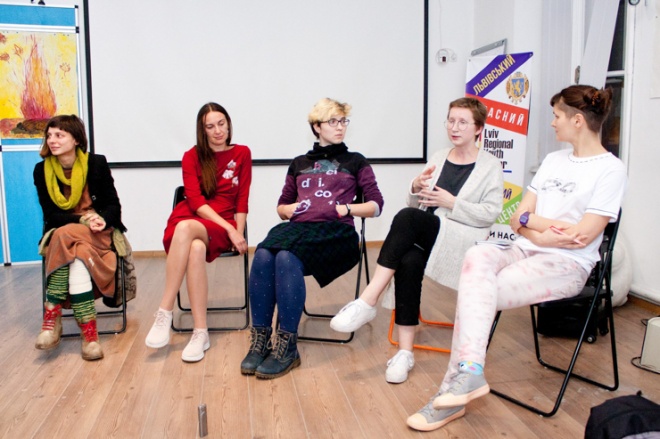 Another special event was the presentation and discussion of the film Silvana, directed by Mika Gustafson, Olivia Kastebring and Christina Tsiobanelis, from the Queerality program which was featured at this year’s Docudays UA in Kyiv for the first time and aimed to speak about the lives of LGBTIQ people. There were also screenings and discussions around the film Ex Libris: The New York Public Library by Frederick Wiseman.

Public screenings in Lviv continued at the Lviv Film Centre and at the Territory of Terror Memorial Museum of Totalitarian Regimes, which, for the first time in the history of the Travelling Festival in Lviv Region, introduced the sale of tickets for the screenings.

The most memorable were the discussions of the films A Woman Captured by Bernadett Tuza-Ritter and Silent War by Manon Loizeau. The films share several aspects: their protagonists are women, and the topics raised by the directors are controversial and “uncomfortable” to discuss.

Olena Kalbus, the coordinator of the program for opposing human trafficking at the Women’s Perspectives Center: “I think that the film A Woman Captured is about the invisible things that exist beside us, that go on and on, crippling people’s souls, swallowing people’s lives; about the things which we call contemporary slavery. The most painful question for those who have been through this hell is ‘Why didn’t you break free?’, and the most painful answer to a plea for help is ‘There’s nothing we can do for you.’ Contemporary slavery, just like the classic slavery which we know from history textbooks, is the most deeply damaging not for human body but for human soul, spirit, trust and faith.” 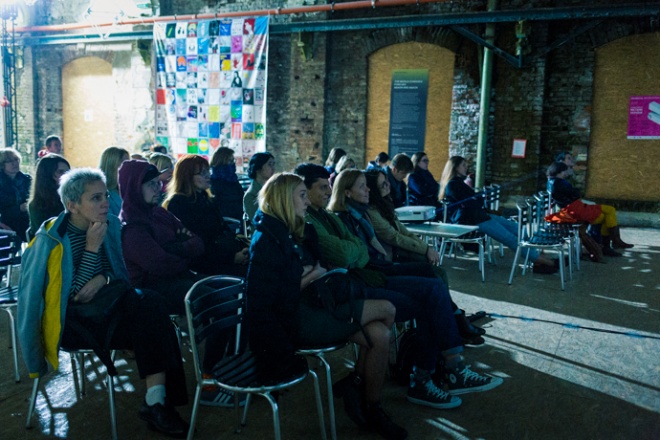 According to the analytical data provided by the International Organization for Migration in Ukraine, since 1991, about 230,000 Ukrainians have become victims of human trafficking. The most relevant aspects of human trafficking for Ukrainians are labor exploitation; sex industry exploitation of both adults and children; using people for criminal activities and forced begging. Another, new form of exploitation is the use of people in military conflicts.

In terms of fighting contemporary slavery, Ukrainian laws are among the best in Europe; they are based on the Council of Europe Convention on Action Against Trafficking in Human Beings. 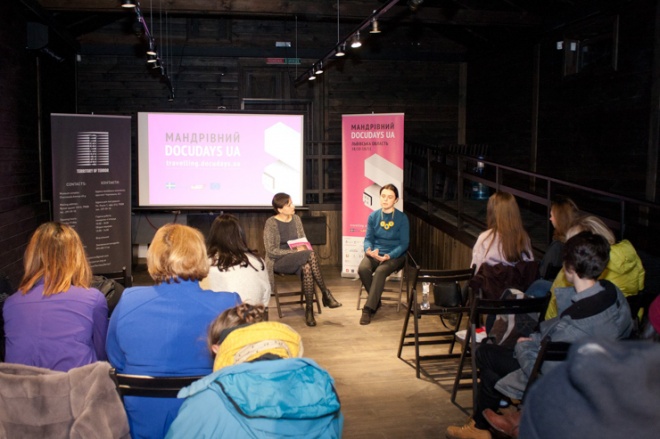 The lawyer said that the legal system in Ukraine currently isn’t fully prepared to work to identify cases of sexual violence against women and to bring perpetrators to justice. At the same time, Ukrainian legislation for protecting victims of violence is developing and improving with a positive dynamic. 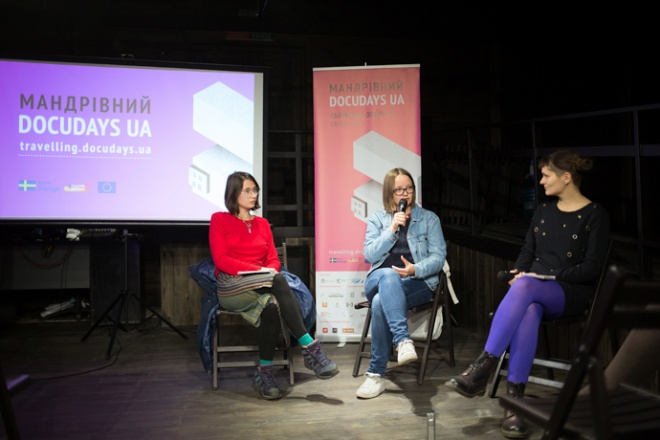 To sum up, we should note that this year’s Travelling International Human Rights Documentary Film Festival Docudays UA in Lviv Region will be remembered for the topic of Equal Equalities, thanks to its public events with sharp discussions around the topics of post-traumatic stress disorder and women’s rights, its educational events for human rights activists about the newest ECHR cases related to protecting women’s rights against discrimination. This year’s Festival is also significant for expanding the audience to include the communities of museum workers, librarians, members of relevant NGOs; and for developing new algorithms for organizing the safety of visitors at its events.