Traveling Docudays UA-2018: Summing it up

Traveling Docudays UA-2018: Summing it up 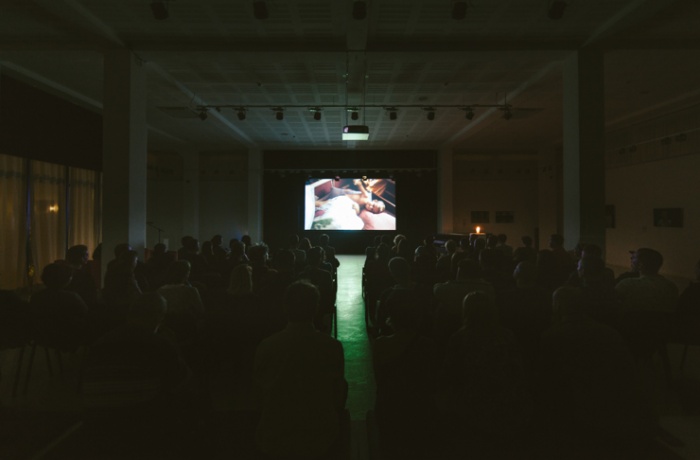 Between October and December, the residents of more than 200 towns and cities in 22 regions of Ukraine had the opportunity to watch and discuss documentary films from this year’s Travelling Docudays UA program, and to participate in the Festival’s human rights events. To review the year 2018, we decided to recall the events of the Travelling Festival 2018.

This year’s Travelling Festival in Ternopil Region started with a special event: a screening of Frederick Wiseman’s film Ex Libris: The New York Public Library. The screening was followed by a discussion on The Library as a Community Center in a Big City, Town or Village — Utopia or Reality?, where the workers of city and university libraries, students, and activists discussed the condition and the role of village libraries in community life, and the future of the Ternopil Regional Universal Science Library. The event was supported by the US Embassy in Ukraine.

The film Ex Libris: The New York Public Library, which was the special Travelling Festival event this year, was also demonstrated in Lviv. OIha Honchar wrote about the discussions about the film after the screenings in Lviv. The main conclusion of the discussion was that libraries should not be afraid to be different. After the screening of the film in Uzhgorod, the audience had a chance to talk about the role and function of contemporary public libraries with the writer, poet and translator Andriy Lubka. Natalia Kabatsiy reported about the discussion in Uzhgorod.

At the discussion that followed the screening of Ex Libris: The New York Public Library in Poltava, the participants managed to specify the main points for library development. For Poltava residents, these points were library space, the library as a place of leisure, establishing connections and social partnership. 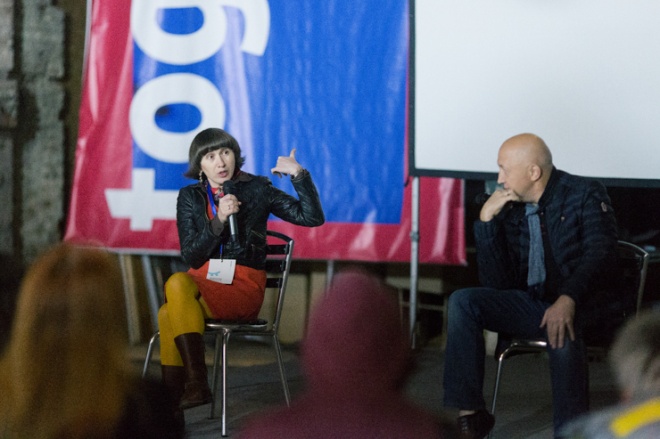 Among the first to be demonstrated in Lviv, in cooperation with the Biennale of Trust, were the films No Obvious Signs and The Distant Barking of Dogs. After the screenings, the audience together with experts searched for answers about how we can speak about war in the language of film. The discussion that followed the screening of The Distant Barking of Dogs was about the children of war: Who are they, where are they and who thinks about them? Before the screening, Oleksandra Kushchynska talked with the artist Alevtina Kakhidze about trust, experience and tolerance, and about her experience of working with children. The screening of the film and the discussion were supported by the Moving Docs platform. 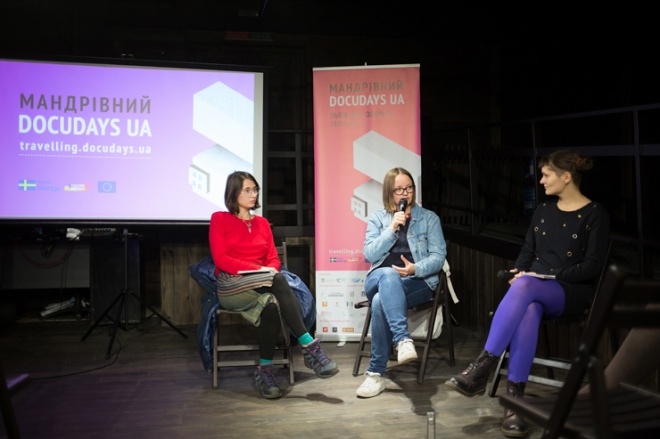 Discussion Rap as a weapon against homophobia and racism. Photo: Yurii Olsh.

On November 3, there was a screening of the film Silvana in Lviv, followed by a discussion with Olha Raiter, the program director of the Wiz-Art Film Festival, and Maria Demisheva, a feminist researcher who studies the Middle East; the discussion was moderated by the feminist activist Yosh. The conversation was both about the life and art of the rapper Silvana and about a wider range of questions, particularly Swedish mass culture, in which the phenomenon of the singer Silvana is embedded. The event was supported by the Moving Docs platform. 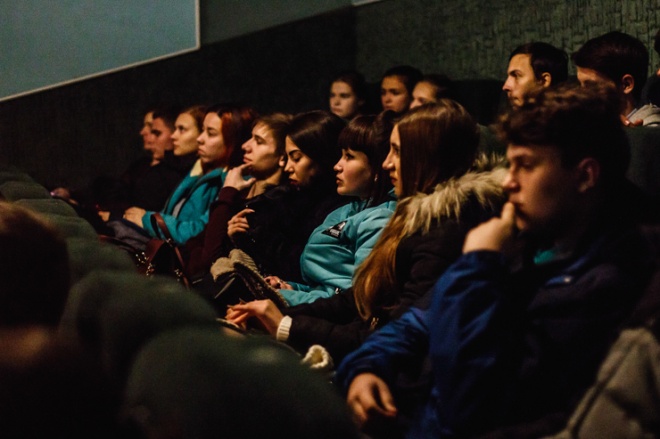 The audience at the screening of the film The Distant Barking of Dogs in Mariupol. Photo: Mykola Yevtushek.

Olha Honchar wrote about the topics that were discussed during the first two-week wave of the festival in Lviv, including the intergenerational dialogue in turbulent times, PTSD and childhood at war, decommunization and the war of symbols, life in the “grey zone.” Olha Honchar also summed up the outcomes of Travelling Festival in Lviv and noted that this year’s festival will be memorable for its discussions around the topic of post-traumatic stress disorder and women’s rights, for its educational events for children that contemplated childhood in separated families and during the war, and for its workshops for human rights advocates. 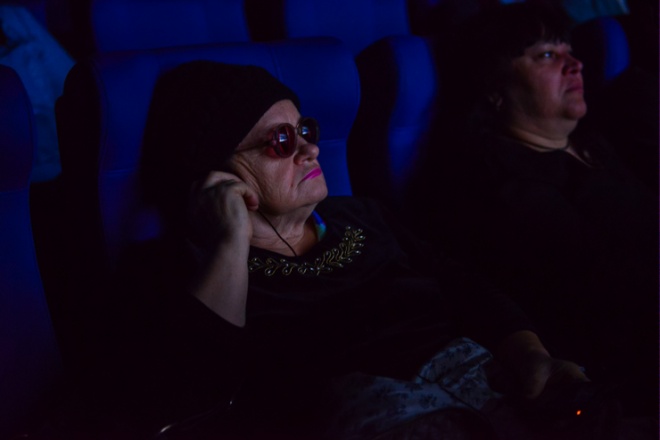 The screening of the film The Distant Barking of Dogs in Kharkiv. Photo: Christina Pashkina.

This year was the first in the Travelling Festival’s history when the program included a film with audio descriptions for people with visual impairments. The inclusive screening of the film The Distant Barking of Dogs, which was also the opening film of the Travelling Festival in Kharkiv, was described by the Festival’s coordinators in Kharkiv, Yuriy Chumak and Volodymyr Kaplun. 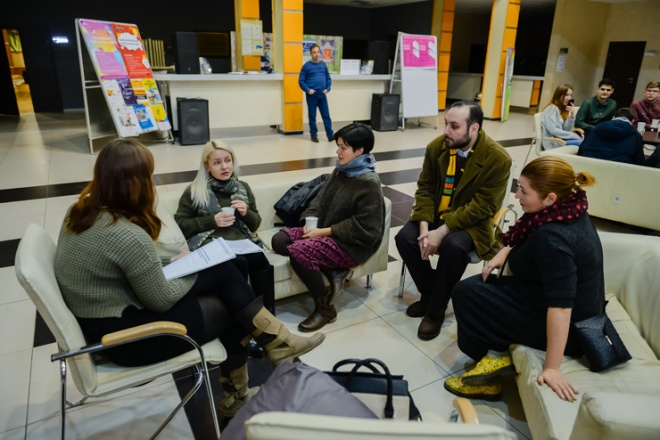 The residents of Kharkiv also had the opportunity to participate in the Living Library. The living books included the following people: a blind entrepreneur, a mother of a child with disabilities, a woman who has had hearing impairments since she was a child but who wants to hear, an openly gay person, and a person who works with refugees and internally displaced people.

As a part of the Travelling Docudays UA in Uzhgorod, the ILKO Gallery Art Center hosted a photo exhibition by Serhiy Morhunov titled Yo Lo Vi, or I’ve Seen It. The photographer aimed to demonstrate the absurdity of war by addressing the phenomena of fear, loneliness, emptiness and emotional vacuum. In addition, an important topic for the author was the strength of mind of the people who keep on living in the so-called “grey zone.” The exhibition opened on November 24, and the opening event included a screening of The Distant Barking of Dogs; the exhibition was up until December 8. 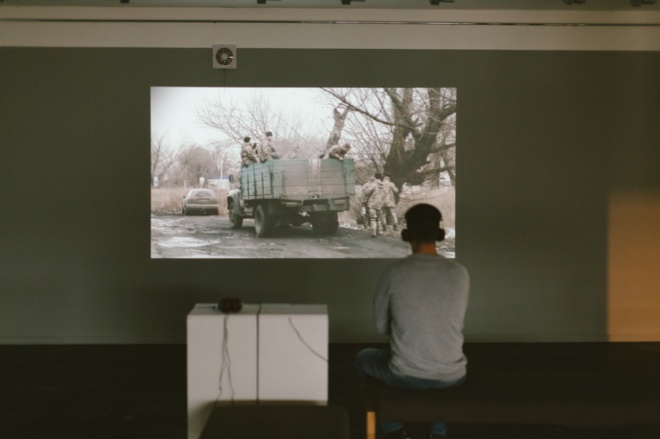 On November 28, there was a screening of the film A Woman Captured and a discussion about actions against human trafficking. The audience of the screening were interested in the questions of scale and geography of human trafficking, and about the available sources, as well as the types of help for survivors. The report about the discussion was written by Natalia Kabatsiy. 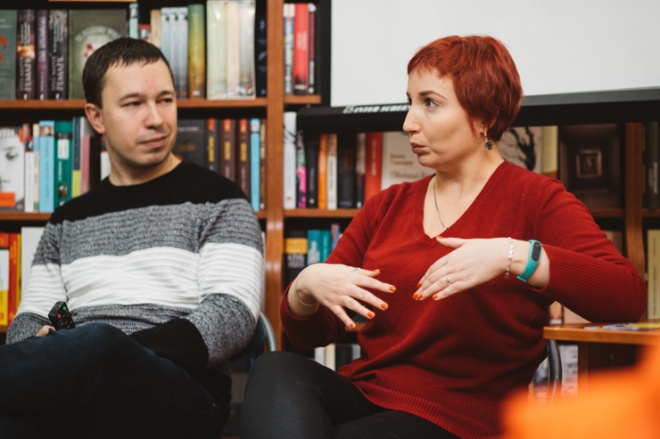 Discussion of the film The Other Side of Everything with the writer Kateryna Kalytko in Vinnitsya. Photo: Andrii Zavertanyi.

The Travelling Docudays UA was not just about screenings of documentaries; its program also featured human rights educational workshops. This year, the Travelling Festival’s human rights events in Kremenchuk included a youth workshop about human rights and non-discrimination, a workshop for the city’s teachers about civic consciousness, and conversations about female and non-female perspectives (and whether we should distinguish them at all). These events were described by Svitlana Ovcharenko and Aliona Glazkova, the Travelling Festival’s coordinators in Kremenchuk. 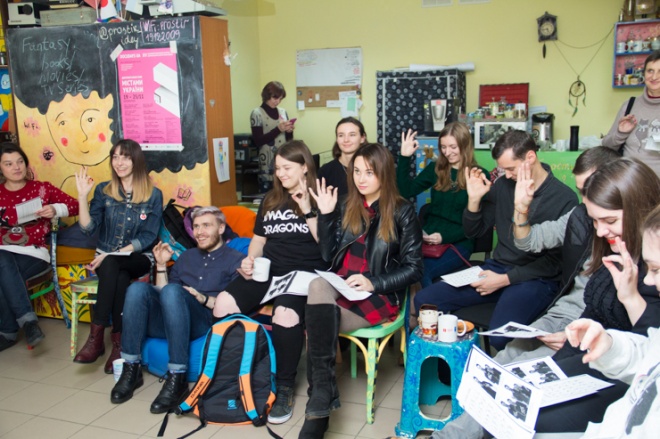 On November 20–21, education workers in Uzhgorod discussed the problems of school environment in terms of participation and self-government at the seminar on the Principle of Equality in Decision Making in School Self-Government. In Ivano-Frankivsk, there were workshops on non-discriminative approaches to police work for “Young Police Advisors”, patrol police officers and precinct police officers. 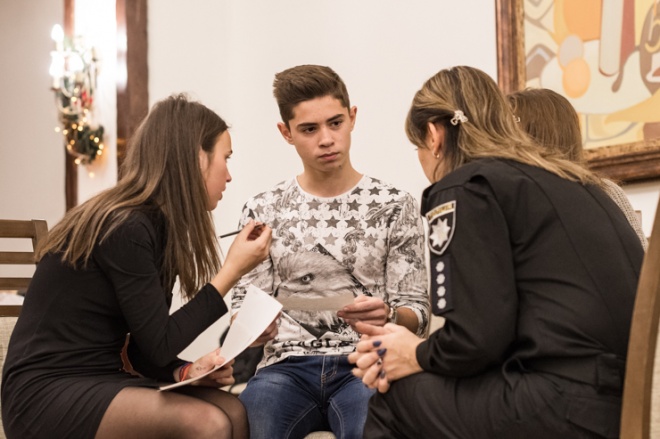 Of course, it would be impossible to write about all the events of the Travelling Festival in one article. But each screening and each discussion aftewards were small steps towards the global recognition of the “equal equality” of all people, and towards the understanding of the importance of upholding human rights. The Docudays UA team is grateful to all the regional partners for their efforts in organizing this year’s Travelling Docudays UA and wishes them inspiration in preparing for the next year’s Travelling Festival.